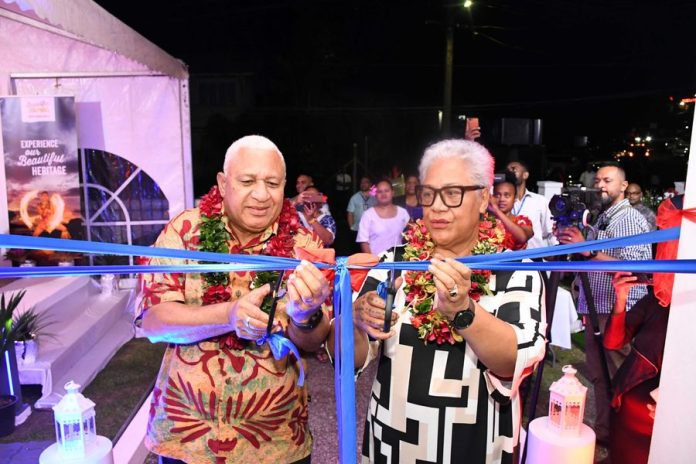 “Your new High Commission shows how serious Samoa is about building its friendship with #Fiji and ramping up its regional engagement,” Prime Minister Bainimarama said.

“Fiji is the Pacific hub of trade, travel, telecommunications, and finance, and our capital is the one-stop-shop for all multilateral matters. In one trip to one city, our region’s Leaders can make connections and coordinate engagement with each other and the world.”

“Samoans began this month by celebrating their 60th Anniversary of Independence. We’re grateful to help you celebrate this evening with another milestone for your diplomatic engagement.”

The Prime Minister also welcomed Samoa’s first female Prime Minister, iamē Naomi Mataʻafa to Fiji, and said he is looking forward to working closely with her to advance bilateral relations, and deliver the Blue Pacific agenda..

He commended the Government of Samoa for the establishment of the new Samoa High Commission in Suva.

He said it signifies the strengthened relations of the two nations, and the unwavering commitment to build stronger partnership for the development of our Pacific region.

The two leaders discussed potential collaboration in mutual priorities, especially in areas of climate change, oceans, economic recovery, trade and investment, and people to people links, among others.

They also shared views on the current global challenges and ways in which the two nations can collaborate to further enhance socioeconomic development in both the nations, and promote greater levels of regional cooperation.

Fiji and Samoa’s partnership in the lead up to the global climate conference COP27, scheduled in November, was also discussed.

In his capacity as the Pacific Islands Forum Chair, Prime Minister Bainimarama provided updates on the upcoming leaders meeting scheduled in July this year, where the Pacific will celebrate the 50-year journey of Pacific regionalism and launch the 2050 Strategy of the Blue Pacific Continent.

In response, Prime Minister Mataʻafa thanked Prime Minister Bainimarama for the kind hospitality, and the opportunity to discuss issues of importance to Fiji and Samoa, and the region.

‘We must all stand and work for our country’, King Tupou...