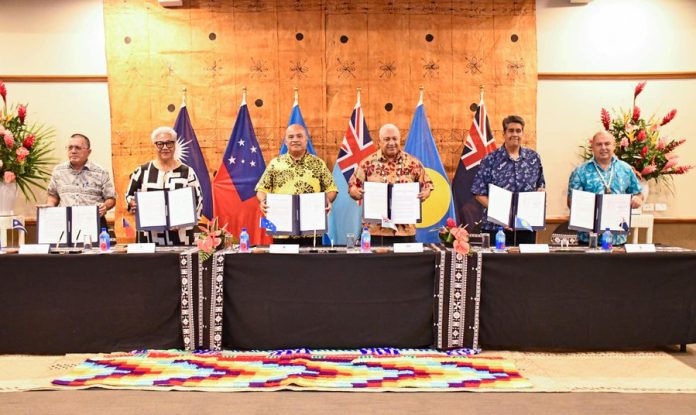 “I think that big dark, dark cloud that has been hanging over the Pacific has evaporated from this meeting.”

That was Federated States of Micronesia (FSM) President, David Panuelo’ s comments after Micronesian members of the Pacific Islands Forum agreed to remain in the important regional group after meeting in Suva Tuesday.

“We’re happy that the family stays together” said Cook Islands Prime Minister Mark Brown, who also attended the meeting with the Presidents of Palau and Federated States of Micronesia (FSM), the Prime Minister of Samoa and Fiji leader, Voreqe Bainimarama, who convened the gathering as Forum Chair. Marshall Islands minister John Silk represented his government at the talks.

Under the agreement reached Tuesday, the current Pacific Islands Forum (PIF) Secretary General, Henry Puna will complete his term in office. The role will then rotate amongst the three subregions, with Micronesia supplying the next SG when Puna ends his term in 2024.

The Office of the Oceans Commissioner will be moved out of the Forum Secretariat to Micronesia. A PIF sub-regional office will also be based in Micronesia. And the Deputy Secretary General roles will also rotate amongst the sub-regions.

The proposal is now circulating amongst Pacific Islands Forum members, with a request it be signed before the end of the month, which is when the Micronesians’ exit from PIF would have taken effect.

Prime Minister Brown says they’re confident the proposal will get the support of the leaders not present in Suva this week.

FSM President David Panuelo said he almost decided not to come to Suva because the meeting was called at the last minute, and he was still in quarantine from a trip to Washington D.C. In the end he boarded a flight provided by Australia and said being here in person, meant things were accomplished that could not be done virtually.

When the PIF’s Micronesian members put forward Marshall Islands diplomat Gerard Zakios as their candidate for SG in 2021, they cited a so-called “gentleman’s agreement” that it was ‘their turn’ to fill the role. The election of Puna to the role ahead of Zakios triggered the schism.

Palau’s President, Surangel Whipps Jr said’s decisions will lead to more inclusivity at the PIF. “I think that’s always been Micronesia’s concern, that it’s not as inclusive as it needs to be. So this really demonstrates that the Pacific has heard what Micronesia has had to say, and is willing to work together to make us stronger. Because that’s really what it’s about, we know that if we’re all at the table working together, we make a stronger Pacific.”

Whipps continued, “We don’t want to have to go through this again. And that’s what this solution comes up with is, we don’t have to do it again. Because now it’s very clear, it’s outlined, we don’t have to rely on anybody’s memory or what happened in the past, it’s in writing, there’s a process. And that process makes it easy, transparent.”

The leaders interviewed all thanked Fiji as Chair for convening the meeting, and finding common ground. In a statement last night, Prime Minister Bainimarama said. “We established a reform package that contains commitments that deepen trust, and political cohesion across our region, and Fiji fully supports its adoption at the next Pacific Islands Forum.”

“Micronesia has always been a leader in oceans. Of course, Palau, we just hosted our oceans conference, so we definitely appreciate that gesture, because it makes us feel like you recognise the efforts that we are doing in the North Pacific, Micronesian challenge, the big marine protected areas that we’ve done, those kinds of things. And, you know, ban on deep sea mining, other other initiatives that we’ve we’ve done and it’s good to be able to recognise that and, and be able to work and hopefully push those to the whole Pacific.”

The full Pacific Islands Forum leaders meeting is scheduled for July 12-14 in Fiji. Samoa’s Prime Minister, Fiame Naomi Mata’afa says it will be an important occasion for leaders to get to know each other.

“Because we’ve been under COVID conditions for so long, it’s really important for us to get to know each other, especially the new leaders like myself. You know, it’s important to come into the group, to see where people are positioned, and essentially, to set a listing of issues, prioritising them. What we can be clear we’re agreed on, what needs working on.”

Cook Islands PM Mark Brown says the biggest learning from this experience is the need to meet in person. “Face to face meetings is a must for Pacific Islanders. The COVID over the last two years meant that we converse virtually, that I think played a big part in not being able to reach consensus, as we have over the last two days, sitting together, talking together and reaching consensus, the Pacific way that we normally do.”

President Whipps agreed. “That’s what these meetings have been about is really building that camaraderie, that mutual respect and restoring that trust that we need to have as Pacific Islanders.”

Leaders said they hope they can now concentrate on other issues.

“There’s so many other bigger issues that we have to tackle on the global stage. And we don’t need to deal with our own internal issues. And it’s good to be beyond that. And so then all we can go back, go to Lisbon and talk about oceans, and go to the UNGA and talk about climate change, and the other security issues that we face, those are things that we need to be talking about as members of the Pacific Blue continent,” President Whipps said.

FSM President Panuelo concurred: “We’re ready to put our feet down and go to work, important issues for our collective interest.”.

Eliminate nuclear weapons before they eliminate us: UN chief