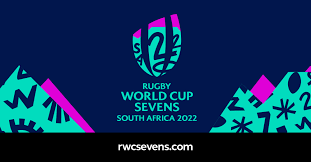 Sevens fans only have 100 days to wait until the best 40 teams from across the globe arrive in Cape Town to contest Rugby World Cup Sevens 2022.

The much-anticipated showpiece tournament is set to put an exclamation mark on the end of a thrilling year of sevens.

In London last weekend we were given a glimpse of the ultra-competitive action we can expect in South Africa as Australia’s men edged rivals New Zealand to win their first HSBC World Rugby Sevens Series tournament in more than four years.

Only six points separate the top three nations in the men’s Series standings ahead of the final event in Los Angeles and with the All Blacks Sevens and Fiji also in fine form since their return, the race for the Melrose Cup is set to be intense.

The women’s Series, meanwhile, came to an exciting conclusion in Toulouse earlier this month and champions Australia are sure to face stiff competition from the Black Ferns Sevens, Fiji, France and a host of others in Cape Town.

It has been a timely return to the Series winning podium for New Zealand’s men and women, who both head into RWC Sevens 2022 as back-to-back defending champions.

The All Blacks Sevens beat England in the final in San Francisco four years ago, 22 hours after the Black Ferns Sevens had triumphed against France with more than 100,000 fans filling AT&T Park across a record-breaking weekend.

As we head into the final 100 days of the countdown to RWC Sevens 2022, we know 32 of the 40 teams who will take to the pitch on South Africa’s Atlantic coast.

Twelve teams – four women’s and eight men’s – were guaranteed their place in Cape Town as a result of their performance at RWC Sevens 2018 in San Francisco. South Africa’s women, meanwhile, were assured of their entry as hosts.

Madagascar were the most recent team to book their place at the tournament when they came second to South Africa at the Rugby Africa Women’s Sevens in Tunisia at the end of April.

The Ladies Makis had been seeded seventh at the tournament in Jemmal but beat hosts Tunisia, Ghana, Zambia and Uganda to ensure they will feature at RWC Sevens for the first time.

“This qualification has brought us into the world of sevens,” Madagascar assistant coach Zaka Ravelonanosy told World Rugby last month.

“We are proud and humbled at the same time because after all, this is only the first step of a very long journey. Now we need to be consistent in our results.”

Earlier in April, Canada’s men and women, Jamaica’s men and the male squads from Uganda, Zimbabwe and Kenya all secured their passage to Cape Town.

It means that there are only eight places up for grabs, four men’s and four women’s, which will be decided at the European qualification tournament next month.

Details of that dedicated event will be announced in due course, but there are a host of Series stalwarts who will be keen to book their ticket.

One of the on form teams on the women’s Series, Ireland, are yet to make sure of their place in Cape Town, while their male counterparts, who were second in Toulouse last month, will also be keen to secure their passage to South Africa.

England and Spain’s women, and Spain and Wales’ men are among those who will be competing against them for one of the eight spots.

Fortunately for sevens fans, there is plenty of action to whet their appetite between now and kick-off in Cape Town on 9 September.

One of the most thrilling men’s Series title races in recent memory will be decided when the circuit heads to Los Angeles between 27-28 August.

South Africa, meanwhile, have been drawn alongside New Zealand in Pool B as they attempt to win a first Series title since 2018, which was of course the season that led into the most recent RWC Sevens.

It means the Series is set up perfectly, but you don’t have to wait until the end of August to sate your desire for sevens.

Between 29-31 July, the Coventry Stadium will host the sevens tournament at the Commonwealth Games 2022, with Australia, Fiji, New Zealand, South Africa and England among the nations chasing gold.