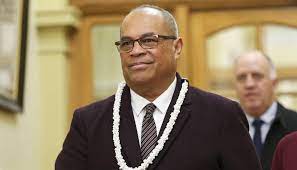 Sio, who is also associate foreign affairs minister, will travel to Fiji from tomorrow to meet with Pacific ministers, and return on Saturday.

He said he would be discussing shared concerns with other large ocean states, aiming to build and strengthen relationships after the Our Ocean Conference in Palau in March.

“The Pacific is central to the lives, cultures and well-being of Aotearoa New Zealand and our Pacific whanau, aiga, kainga, kopu tangata, and fanau. At the Our Ocean Conference, I encouraged progress on issues such as the conservation of our marine environments and the sustainable use of ocean resources, and I intend to continue these dialogues during my visit,” he said in a statement.

He will also meet with Fiji’s minister of health.

Minister of Foreign Affairs Nanaia Mahuta has been under increasing pressure over New Zealand’s approach to the Pacific as China’s own Foreign Minister Wang Yi toured eight Pacific countries.

Wang secured co-operation agreements with Samoa and Kiribati after officially signing a security agreement with the Solomon Islands.

The United States has also been turning increased attention to the region, setting up the Indo-Pacific Economic Framework with 12 other countries including New Zealand.

China was unable to get its broader regional agreement signed by Pacific countries however, and Mahuta said that reflected the Pacific’s view that regional measures should be discussed at a regional level – and she believed that would be discussed at the upcoming Pacific Islands Forum.

Mahuta has faced questions over why her Chinese counterpart was able to do a full tour of the Pacific before she could, and Tuesday told reporters New Zealand’s relationship with the Pacific was very good, and in good shape.

“In fact the Pacific rely on us to be consistent, respectful, reliable in the way that we work with them and partner their aspirations … I’ll be absolutely looking to meet with my Pacific foreign minister counterparts, which I already have for many of them.

“When the border opened for Fiji, which was one of the earliest border openings, I went there to demonstrate that we want to engage very quickly and as border settings allow I’m going to absolutely try and get to many of the places across the Pacific.”

China had the resources to do a full Pacific tour, had been working for a long time to build its relationship with the Pacific, and Chinese interests in the Pacific were not new, she said.

“They have the resources to do that obviously but they have over a period of time secured a strong relationship across the whole of the Pacific and they’re building on that.

“What is unusual is that they’ve done eight Pacific countries… in a very short time.”

She planned to travel to Solomon Islands as soon as the country’s foreign minister Jeremiah Manele was available to meet with her.

Sio meanwhile will also participate in events to celebrate Samoa Language Week and the 60th Anniversary of Samoa’s independence upon his return to Aotearoa New Zealand.

Vanuatu PM call for Russia and Ukraine to return to negotiating...