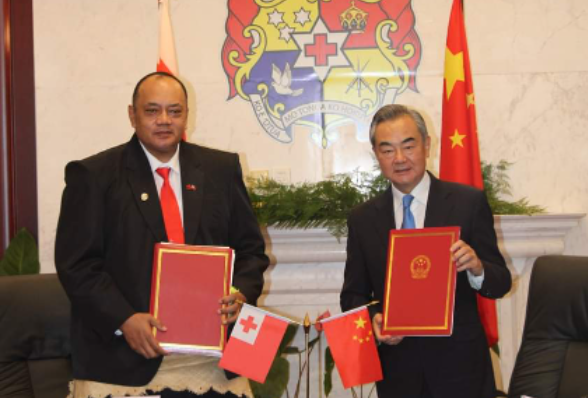 China’s Foreign Minister Wang Yi on Tuesday signed agreements in Tonga for police equipment and fisheries cooperation on a tour through the Pacific islands region where Beijing’s ambitions for wider security ties has caused concern among U.S allies.

Pacific island nations were unable to reach consensus in a meeting with Wang a day earlier over a sweeping regional trade and security pact China has proposed.

“Both meetings focused on mutual respect and the common interest of the people of China and Tonga,” it said.

Agreements between the two countries’ disaster management agencies and for China to provide a police laboratory and customs inspection equipment as well as a memorandum on the “blue economy” would assist Tonga’s long-term development, it said.

Sovaleni “conveyed Tonga’s gratitude to China with the relief assistances offered after the volcanic eruption and tsunami”.

Tonga, which was hit by a volcanic eruption and tsunami in January, owes two-thirds of its external debt of US$195 million to China’s Export-Import Bank, its budget shows.

Australia and New Zealand are its biggest donor nations, highlighting the squeeze some Pacific islands face as geopolitical tensions between China and U.S allies ratchet up.

In the aftermath of the eruption, Australia and New Zealand coordinated allies in a relief operation involving defence flights and naval vessels. China also sent aid and equipment on commercial and naval vessels in a highly publicised relief effort.

Tonga appointed the first Australian as police commissioner this month, and has declined to comment on whether it supports a regional policing pact with China.

On Monday, a virtual meeting hosted by Wang in Fiji with counterparts from 10 island nations deferred consideration of a sweeping agreement spanning policing, security, fisheries, data and a free trade zone, proposed by China.

A draft communique and five-year action plan was leaked ahead of the meeting, amid criticism the deal would bind the nations closely to China, and raise geopolitical tensions with the United States.

Despite their small populations and economies, each Pacific state represents a vote at international forums such as the United Nations. They also control vast swathes of resource-rich ocean and access to a region with strategic military significance.