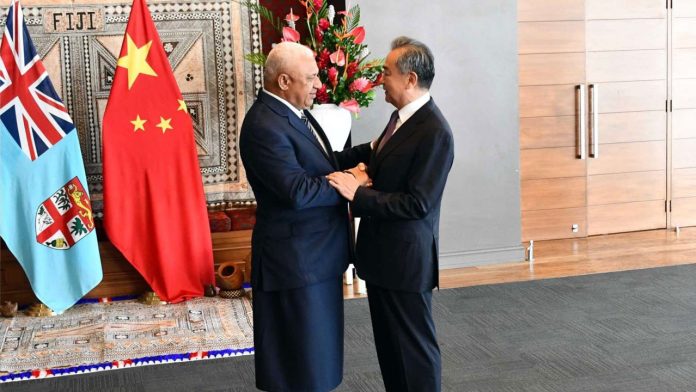 Fiji is perfectly positioned to take advantage of the tussle between China and Western countries for greater recognition in the Pacific.

Chinese Foreign Minister, Wang Yi is currently on a marathon visit to Fiji and other Pacific Island nations, calling it a mission of peace, friendship, and cooperation.

Academic, Professor Tarcisius Kabutaulaka at the University of Hawai’i’s Department of Pacific Studies has been closely studying China’s growing influence for more than 10 years following the China-South Pacific Development Cooperation Forum meeting in Nadi in 2006.

Professor Kabutaulaka believes island nations including Fiji should carefully consider proposals offered by the Chinese, and use them to their advantage.

He said that all eyes are on the Pacific as Australia and other Western countries scramble to counter China’s efforts to cement its influence in the region.

“I think Fiji has done a wonderful job in managing that relationship and part of the reason why Fiji has been quite successful is because I think Fijian officials both government and public servants understand how China operates.”

Professor Kabutaulaka said that Pacific Islands have long been contested space, even as far back as the colonisation era in the 1800s with big powers attempting to control the region or selfishly take from it.

However, he said that China’s inclusion is seen as an opportunity to engage with a power other than traditional development.

“Pacific Island leaders should be managing the relationships whether its with the U.S, or with China in ways that will benefit their people and if it means trading with China in spite of the fact that they have a communist system and if that trade benefits PIC’s then they should engage with China.”

“We cannot re-treat from the field of multilateralism in the face of this multiple crisis indeed global cooperation and international law have never mattered more.”

The feeling is mutual from the Chinese government and their Foreign Minister Wang Yi said that they are looking forward to fortifying trust and mutual respect with Pacific Island countries.

“China appreciates Fiji’s firm commitment to the One-China policy and the will as always support Fiji in maintaining social stability and national harmony.”

Chinese government officials in Fiji are adamant Foreign Affairs Minister Wang Yi’s visit this week is purely for economic development and to strengthen bilateral ties with no hidden agenda.

This was stressed by the Chinese Ambassador to Fiji, Qian Bo stating China has no intention of establishing a military base in the Pacific.

Wang’s visit to the region has made headlines around the world, with Western powers claiming it’s an attempt to gain a stronghold on Pacific Island countries.

The controversy began as soon as news broke about Wang’s visit to the region, and Chinese ambassador Qian Bo is trying to put to rest a number of claims – adamant on its position that it’s nothing more than an effort to strengthen ties and uphold multilateralism.

China maintains that all it wants is common development – fostering harmony, justice and stability in the region.

Bo has hit back at rival governments, questioning these foreign powers’ interests in the region.

“Everybody who can read and listen can understand what are those countries are trying to politicise our relationship with the south pacific countries. If some countries, particularly officials or the government challenge China’s presence then those are the countries I am referring to.”

Prime Minister Bainimarama has made it clear that Fiji’s needs and that of the Pacific in addressing immediate issues far exceed any geopolitical point-scoring.

“I hope you also know that geopolitical point-scoring means less and little to anyone whose community is sleeping beneath the rising seas, whose job has been lost to a pandemic and has been impacted by the rapid rise in price of commodities.”

China will soon release a position paper outlining plans for development and assistance for Fiji and the region under an agreement for mutual benefit and progress.