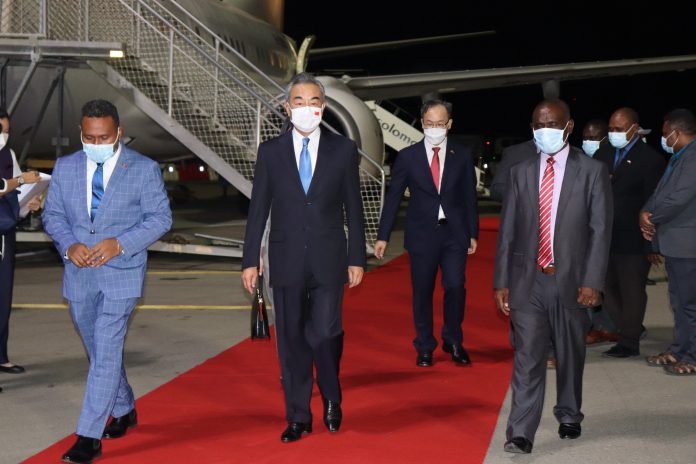 Why is everyone talking about China in the Pacific all of a sudden?

China’s ambitions in the Pacific first attracted renewed attention back in March, when news leaked of a draft security agreement that would grant Chinese military and police significant access to Solomon Islands. The news surprised Australia and New Zealand, the Solomon’s traditional security partners, as well as other Pacific nations and the U.S. This week – as Chinese foreign minister Wang Yi embarked on a 10-day visit to the Pacific taking in eight countries – news broke that Beijing was seeking to secure a sweeping economic security deal with 10 countries that would mean a dramatic expansion of its influence in the region.

Why are Australia, New Zealand and the US concerned?

All three countries have voiced concerns that an increased Chinese security presence in the Pacific would destabilise the region, with the biggest fear regarding the Solomons deal being that China could eventually establish a military base on the islands, just 2,000km from Australia’s east coast. Beijing and Honiara have denied such a plan.

China’s reported interest in establishing a similar deal with Kiribati, meanwhile, has been of concern due to its fishing resources and geostrategic location in the central Pacific. Kiribati and Solomon Islands both had diplomatic relations with Taiwan until 2019 when they switched to recognise China.

News of Wang’s visit and the potential multilateral security and economic deal will have set fresh alarm bells ringing in Washington, Canberra and Wellington.

“When you consider the extent of China’s global interests and the relatively small size of the Pacific countries, that tells you immediately that Beijing has ambitious long-term plans in the region,” Richard McGregor, a senior fellow at Australia’s Lowy Institute, says.

What are they doing about it?

In her first days in office, Australia’s new foreign minister, Penny Wong, has made it clear that the Pacific will be one of Canberra’s priorities after years of friction between the Pacific and the previous Liberal-National coalition government. She recorded a video address to regional leaders soon after her inauguration pledging to make climate a priority and that Australia would be a “generous, respectful and reliable” partner. On Thursday she set off on her own competing visit to the Pacific, with a meeting with Fiji’s prime minister, Frank Bainimarama, and a speech at the Pacific Islands Forum in Suva on the agenda.

The U.S sent a high-level delegation to Solomon Islands last month to express its concerns about the China deal, with ambassador Daniel Kritenbrink, assistant secretary of state for east Asian and Pacific affairs, later refusing to rule out military action should China establish a military base in the Solomon Islands.

New Zealand has taken a softer approach, with prime minister Jacinda Ardern this week saying it was “not for us to speak on behalf of other Pacific nations” but that Wellington stood “ready to respond” to security needs in the region.

What deals has China signed in the Pacific and what’s in the pipeline?

The Solomons deal marks Beijing’s first known bilateral security agreement in the Pacific. It is widely expected that China will sign further agreements with Solomon Islands during Wang’s visit and will be looking to sign agreements with other Pacific nations during the tour as well.

Teburoro Tito, Kiribati’s Ambassador to the U.S and the UN, told the Guardian this week that China had agreed in principle to finance the refurbishment of a world war two runway on Kanton island, but denied reports that a broader security deal was in the works.

There are concerns that Kiribati could sign a deal with China, giving it special fishing rights in the Phoenix Islands Protected Area (PIPA), which was one of the world’s largest marine protected areas, until the Kiribati government announced last year it would open up the PIPA to commercial fishing.

Vanuatu has just signed a contract with China for the construction of a new runway extension at Pekoa airport on the island of Santo, to allow access for larger aircraft, making it accessible for the delivery of humanitarian aid.

So have Australia, New Zealand and the U.S dropped the ball?

The Pacific islands have long accused Australia of failing to take their concerns on climate – which they view as an existential threat – seriously. Canberra’s leaders have also been caught mocking the Pacific over its concerns. In 2015, then prime minister Tony Abbott and his immigration minister, Peter Dutton, were caught joking about rising sea levels in the region. After a 2019 meeting of the Pacific Islands Forum, several leaders accused then prime minister Scott Morrison of dismissive and insulting behaviour, with Bainimarama telling the Guardian his condescending attitude was pushing the Pacific towards China.

New Zealand has a more positive relationship, and 60% of its foreign aid goes to the region. However its influence has declined in recent years, with Dr Anna Powles, senior lecturer at the centre for defence and security studies at Massey University, putting this down to “assumptions that Australia and New Zealand didn’t need to put considerable effort into the region to maintain their perceived primacy”.

The US has also been accused of disinterest and focusing on undermining China rather than responding to what Pacific leaders want.

What do the deals mean for the Pacific?

There are fears that deals mean not just a loss of sovereignty for island nations but also that they would make them the centre of unwanted geostrategic competition. Some of the second world war’s bloodiest battles took place in the Pacific. In Solomon Islands there are also fears that Chinese military or police could be brought in to quell protests.

In a letter to 21 Pacific leaders seen by Reuters, David Panuelo, the president of the Federated States of Micronesia (FSM), which will be holding a virtual meeting with Wang, said his country would argue that the proposed multilateral deal should be rejected, because he feared it could spark a new “cold war” between China and the west.