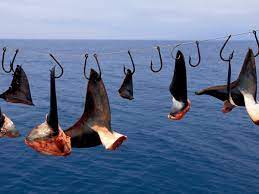 The Marine Stewardship Council, which certifies fisheries under its blue tick sustainability label, has ordered an independent investigation into allegations of shark finning on tuna vessels in certified Pacific fisheries.

Shark finning is the cruel practice of removing fins from live sharks. A report by the UK charity Shark Guardian with CNS Global Consulting, a sustainable development consultancy, has alleged it took place on board three vessels operating in the western central Pacific that were certified by the MSC, which runs the world’s largest fishery certification programme.

Official documents from independent observers who monitor fishery compliance, seen by the Guardian, said shark finning happened on board vessels in MSC-certified fisheries in 2019 and early 2020. They reported silky sharks and a black-tipped reef shark as having “DFR” or “discarded fins retained”, a reference to the practice of cutting fins off live animals and discarding their bodies overboard. Both species are classified as “near threatened” with extinction by the International Union for Conservation of Nature.

A third of shark and ray species have been overfished to near extinction, a study found last year.

Despite documented evidence, little action was taken to prevent the boats from operating under the MSC banner, the charity said, nor was anyone prosecuted.

Jean-Jacques Schwenzfeier, director of CNS Global Consulting, said: “The observers told us their reports are constantly being ignored and shark finners are not being prosecuted.

“We are not saying the MSC is a bad programme. The MSC is probably unaware this is happening. But the auditing system is flawed and needs improving.”

A spokesperson for the MSC said it took the allegations “seriously” and had asked Assurance Services International, which oversees Cabs, to investigate.

“Shark finning is completely prohibited in MSC-certified fisheries and we take the allegations contained in the Shark Guardian report, relating to vessels fishing in the western central Pacific, seriously. On receiving notification of this report via the media, we immediately asked the independent oversight body, Assurance Services International, which oversees our third-party certification activities, to investigate the claims relating to shark finning and the other matters raised in the report.”

Any vessel convicted of shark finning is banned from MSC certification for at least two years, it said.

The MSC has come under pressure from conservation groups to reform standards on shark finning, and is now proposing new standards. Earlier this month, 90 marine conservation experts, organisations and international researchers welcomed the MSC’s move towards zero tolerance of shark finning by requiring all catch to have “fins naturally attached (FNA)” without exemptions.