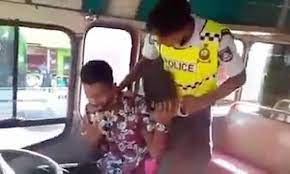 Fiji police have suspended an officer pending an investigation after a video showing what appeared to be the use of excessive force against a bus driver during an arrest was shared widely in the Pacific country.

The video appears to show a police officer attempting to remove a handcuffed bus driver from his bus in Labasa on Vanua Levu, Fiji’s second largest island on Monday.

In the video, which was shared thousands of times and prompted hundreds of comments condemning the apparent conduct, a policeman is seen shouting and pointing at the bus driver, before the officer wraps his hands around the man’s neck and appears to slam his head against the seat several times.

Police told local media that an officer had been suspended based on initial findings of an investigation conducted by the Internal Affairs Unit and would be on leave while an investigation was completed.

They also said the bus driver had been charged with one count of failure to give his name and address and one count of serious assault, with allegations the driver assaulted the police officer during the execution of his duties. The bus driver appeared in the Labasa magistrates court on Tuesday. Police did not respond to the Guardian’s request for comment.

In the video, passengers on board the bus are heard telling the officer: “You can’t do that.” At one point, the police officer turns to a person on the bus, saying “I know my job.” Another voice can be heard on the video telling the bus driver: “Excuse me, I am a member of parliament. You cannot do that.”

Lenora Qereqeretabua, an MP from the National Federation Party, has identified herself as the MP on the video. She posted an account of the incident on her Twitter page, saying she was travelling to Savusavu – an hour 20 minutes out from Labasa – when she “witnessed a commotion”.

“I decided to intervene and got into the bus saying to the police officer, “Excuse me, you can’t do that, what’s he done? What’s your [regimental] number? You can deal with this without violence,” Qereqeretabua posted on Twitter.

“The poor driver said the police officer had his hand on his neck and the passengers who had been protesting backed the driver up. All the while the officer was tugging at the driver’s arm.”

According to Qereqeretabua, the driver left with the officer and she rang the bus company’s owner to inform what had occurred.

“Non-violent conflict resolution is something all of us need to learn from school,” she said, adding “those tasked with enforcing whilst upholding the law must learn that there is always a calm way to approach a problem without making it worse.”

She says she will “be a witness if it’s necessary.”

The Fiji Bus Operators Association (FBOA) has condemned the incident and is calling on the Fiji Police leadership “to take appropriate action” against the officer.

Zane Dean, acting president of FBOA, says the incident “demonstrates the lack of understanding of some police officers about their role and the limits to their powers.”

Last month, Sitiveni Qiliho, the commissioner of police, announced that a human rights division would be set up within the police force to investigate human rights complaints by its officers.

Police brutality cases are not uncommon in Fiji. Figures from Fiji’s director of public prosecution obtained by the Guardian at the end of 2020 show that 400 charges of serious violence were laid against police officers between May 2015 and April 2020.

Fiji will head to the polls this year and Sitiveni Rabuka, former prime minister and military general, and now the leader of the People’s Alliance Party is challenging sitting prime minister Frank Bainimarama for the top job.

Rabuka says reforming the police force will be high on his agenda should he win.