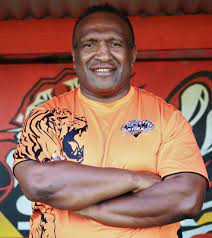 PNG RFL CEO Stanley Hondina says both coaches have met all the coaching requirements and both will mentor the team (PNG Kumuls) for the 25 June mid-season Test against Fiji Batis including the Prime Minister’s XIII and Rugby League World Cup towards the end of the year.

“On behalf of Wapu Sonk the chairman of PNG Kumuls, Sandis Tsaka PNG RFL chairman, the PNG RFL Board and rugby league management and staff at PNG RFL, we wish to officially announce that the head coach for PNG Kumuls to the RLW Cup this year is none other than our very own Stanley Tepend.

“Together with him (Tepend) we’ve got a mentor to shadow him, basically someone who he can bounce off ideas when he needed guidance at that level, we have Shane Flanagan (2016 premiership winning coach of Cronulla Sharks and current pathway coach for St George Illawarra Dragons.

“That engagement will be for eight months which starts this month (May) and terminates in December 31 basically at the World Cup.

There were other notable candidates applying for the head coach position.

“We’ve had a few interests…Stanley Gene was the obvious one and he was considered.

He got to the second stage of the interview and got a bit closer.

Because of the geographical location and other factors coming into play, we felt that Tepend got the nod ahead in terms of interview.

They both (Gene and Tepend) proves that there has been maturity in terms of coaching.”

“We also commend the outgoing coach, Michael Marum and our gratitude from the board and PNG RFL.

He (Marum) had single handedly taken us from where the game was.

We are pleased to read what the Post-Courier‘s stories on him (yesterday’s back page) all in the good name of what he has done for the game.

“He was the PNG national that PNG RFL invest in him a lot to get the game to what it is today. We fully support him and we are committed to seeing him prosperous in life.

He is a great character, known to have the winning formula, known for what rugby league is,” says Hondina.

All the boxes were ticket as per the position vacant advertisement for the Kumuls head coach and Hondina said the process involved a lot of wider stakeholder consultations.

Offer letters were put through to both coaches and both accepted in writing back to PNG RFL which then allowed the finalization of coaching contracts.

“The first assignment will be the June 25 mid-season test and there has been communication with both coaches and the support staff. We congratulate Stanley Tepend who has worked hard, he is renown around PNG through Lae Tigers and Shane brings with him NRL experience and expertise. That gives comfort to the Board and the game in PNG.

“You (Tepend) deserve it and thank you as well to Shane (Flanagan) for accepting our offer and willingness to work and further grown the game in PNG.

He (Flanagan) did make mention on Jack de Belin and Elsie Albert being in Dragons system,” says Hondina.

Coach Tepend said a lot has happened over the last few months.

“Being part of the Hunters was an highlight for me. To have been given the opportunity to assist and also learn as well at this level.

Now to be given this opportunity, I am really humbled and thank the Lord for his timing and allowing this to happen in his way.

“I am excited to take this challenge and am grateful to Coach Michael Marum for initially having me part of his Kumuls staff over the last 6 years, and my journey to have some success with the team will always stay with me.

Now I look forward to carrying on that as coach,” says Tepend.

He is currently the St George Illawarra Dragons pathway coach and was officially announced by PNG RFL as the Kumuls head coach Stanley Tepend’s coaching mentor.

When contacted Flanagan said the experience of coaching at the NRL level as well as developing players is what he is keen to share with PNG Kumuls.

“I am really excited about it (working with PNG Kumuls team and coaching staff). Leading into the Mid-season test against Fiji and then there’s the RLWC at the end of the year.

I am really excited to work with all the staff and giving them a bit of leadership and mentoring.

“Obviously, I can pass on some experiences and knowledge to the team and staff,” says Flanagan.

“Coaching at the NRL…I’ve coached at the NSW level, NRL, assistant coach at Origin and Australian team (Kangaroos) including my experience with Cronulla Sharks winning the competition (2016).

These will obviously help all the players and hopefully the nation with all the people as well who love rugby league and I am excited about that.

“This will also be a good opportunity to uplift some experience and knowledge that I’ve had in the last 20 to 30 years in the NRL.

Working alongside some people like Paul Aiton and the coach (Stanley Tepend) today . They are both excited about it and I am really excited as well.

“We need to encourage younger players to come through and show a pathway…playing for PNG and hopefully play in the NRL.

He was also fortunate enough to coach few PNG players during his coaching tenure.

“I’m sure I coached them all…I’ve coached Paul Aiton for a couple of years at the Sharks and had a little bit to do with Alex Johnston. As well as my son (Kyle Flanagan) playing with Lachlan Lam at the Roosters.

“I’ve got a good relationship and a good knowledge of all those players and probably the big one would be Justin Olam. I’ve watched him progress and really interested in those type of players and guiding them to help younger players to come into PNG team.

Flanagan said back then he had the chance of playing for Parramatta Eels, St George and West. He then went on coaching at Parramatta, had a bit of success winning a few of those competitions in the lower grades.

“I’ve been involved in some good football teams and then went on to Roosters (2004) winning the comp undefeated in the U20s, went on to the Sharks with Ricky Stuart as the assistant coach and took over from him in 2010 as head coach.

Obviously winning the comp in 2016 and I’ve been lucky to be involved in some really good clubs and players.

“This is now another step for me to develop more players from PNG and hopefully go on to play in the NRL,” says Flanagan.