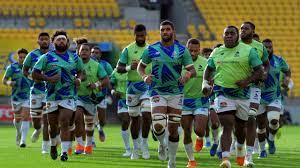 Fijian Drua and Moana Pasifika will put pride on the line and are promising a “cultural experience” when Super Rugby breaks new ground on Saturday with the first clash of two Pacific island sides.

The powerful islanders, with their flair and unorthodox style, have always been an integral part of teams in the southern hemisphere club championship.

But this year for the first time they have teams of their own, with the competition rebranded Super Rugby Pacific.

The round 12 clash may only be a battle to avoid the wooden spoon, but it will be a historic occasion with bragging rights on the line when Moana Pasifika and Fijian Drua run out at CommBank stadium in Sydney.

“Our boys are really excited … It is a clash of the islands and we are really looking forward to it,” said Drua coach Mick Byrne.

“It should be a massive cultural experience.”

Moana Pasifika coach Aaron Mauger, highlighted the mutual respect the islanders have for each other.

“It’s a celebration of both teams’ inclusion into Super Rugby,” said Mauger.

“From a supporter perspective, we’re right behind them.

“(They) are obviously part of our beautiful moana (ocean), the Pacific, so the boys have been right in behind them and connecting with quite a few of their players.”

Fijian-born Moana Pasifika wing Timoci Tavatavanawai is looking forward to the challenge of going up against his islander “brothers”.

“It’s going to be cool playing against the Drua boys, they’re like my brothers,” said Tavatavanawai.

“I played with half of the team when I was younger. I’ve never played against them so it’s going to be interesting.”

Auckland Blues coach Leon MacDonald had a good look at the Drua when his table-topping side battled to a 35-18 win against the islanders and found them “so different” to every other team.

“The way they attack the game is refreshing. We’re sitting here frustrated because we were unable to play the game we wanted to because they didn’t allow us to.”

Moana Pasifika are arguably playing the better rugby and go into the match off the back of a narrow 26-20 loss to the NSW Waratahs, after leading 17-0 at half-time.

The Drua, however, suffered a 67-5 thrashing by the Wellington Hurricanes and Byrne’s task was to pick them up again after a “quite poor” training session at the start of the week.

“They’ve been two of our best rugby players all year and they know they got it wrong, so there was a consequence coming,” he said.