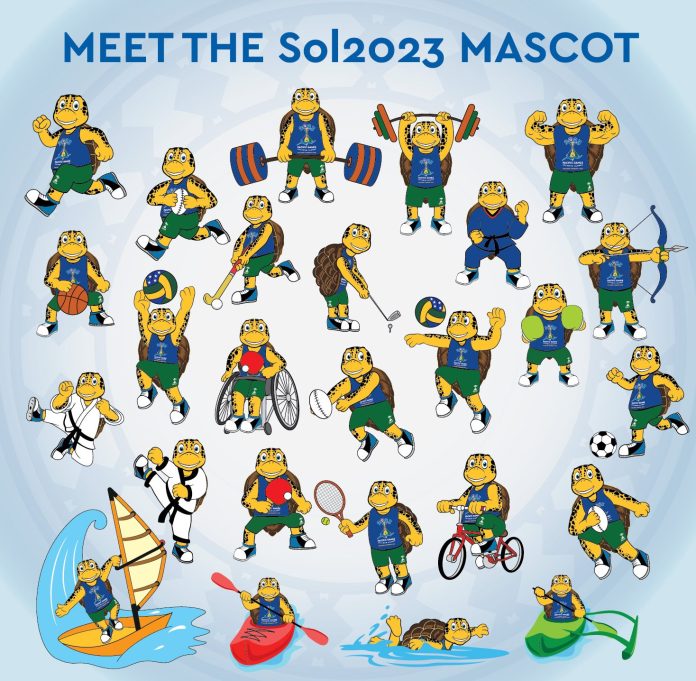 The Mascot for the 2023 Pacific Games in Honiara, Solomon Islands has been revealed.

The winning design was officially unveiled on Thursday 12th May, 2022 after the Sol2023 Games Organizing Committee (GOC) Board endorsed the winning entry after an expert panel of judges selected the winner from a total of over 19 entries received from local artists in the country.

The Mascot for the 2023 Pacific Games is a Turtle. A naming competition for the mascot will open soon and schools are encouraged to take part.

Media and Communications Chairman of the GOC Board, Robert Iroga said the Board agrees and endorses with the Turtle’s significance to our society and community in terms of our country and region.

“In agreeing to that we also see the need to protect turtles as it is an endangered species in our region as well as in the Solomon Islands. Turtles are also not only found in the ocean but on the land too as the place of life and where life begins. Also, it is common to all our islands and the region,” Iroga said.

He highlighted that the Mascot is a notable icon of any Games and the Pacific Games is no exception.

“For Sol2023, the Mascot will surely be a prominent feature of our Games especially in the months leading to November 2023. The mascot elevates the value of the Pacific Games by promoting friendship, unity and building sportsmanship.

“I am sure it will be the heart-beat of our celebrations as prior to the Games the Games will visit valleys, lagoons, mountains, terrains, sandy-beaches, our blue ocean to crossing rivers and lakes as it travels the width and the breath of our country.

“In a nutshell, it is a uniting factor for our country which I also believe will be a source of pride for our people,” Iroga said.

The Mascot captures the spirit of the 2023 Pacific Games with a character that is representative of all regions and peoples of Solomon Islands.

It is also authentic and imaginary, inspirational, fun, vibrant, positive and energetic. It is sporty, adventurous and friendly reflecting the theme for the 2023 Pacific Games that is “Challenge Celebrate and Unite”.

Chairman of the Mascot Judging Committee, Robert Au explained during the launch that the selection criteria was based on five categories including originality, Solomon Islands’ four national colours, character, creativity and functionality.

“I must say that the submissions were of very high quality and all of them are Solomon Islanders.

“We highly appreciate those who took time to be part of the process and we also appreciate that there would also be one winner. At the final judgment, three were ranked high: of a possible 200 points, the person who finishes third scores 164 points, second 172 points whilst the winner has 178 points,” Au explained.

Local artist, Brain Feni was the winning Designer whose original drawing was digitalised to the 2023 Pacific Games Mascot which was officially unveiled on Thursday 12th May at the Sol2023 Headquarters in Honiara.