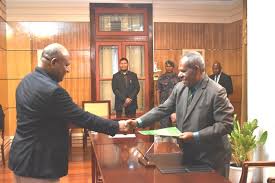 Three State authorities in Papua New Guinea have clashed over the issue of writ as the country counted down to 4pm Thursday for the official start of the National General Election.

The death of Deputy Prime Minister Sam Basil on Wednesday night forced Prime Minister James Marape to recommend for the deferral of the issue of writs to another date.

He made the announcement at a 2pm press conference at the Sir Manasupe Haus.

However, while he was making the announcement, Electoral Commissioner Simon Sinai announced the deferral of the formality to 19 May.

The Post-Courier was present at the Electoral Commission office interviewing Sinai when his lawyers arrived to advise at 3:45pm that the Governor General had summoned him to Government House.

Sir Bob arrived into the State Room at 4pm and waited for 16 minutes before Sinai arrived.

At 4:16pm, Sinai advised the Governor General Sir Bob Dadae that he had deferred the issue of writs to 19 May.

Sir Bob told Sinai he would not entertain another delay.

“The country is shocked with the passing of the Deputy Prime Minister, however, I will not delay the election just because a leader has passed, said Sir Bob.”

“I am sure all polling sites will ensure respect is given by all candidates and supporters,” he said.

The Governor General then sat down at 4:23pm and waited for nearly five minutes while lawyers of the Electoral Commission discussed what he had said.

Sinai did not move has he waited for his lawyers’ approval to present the writs.

An irate Sir Bob then said; “What are we waiting for? You do not need the approval of your lawyers.”

At exactly 4:27pm the Governor General officially signed the last four writs signifying the start of the 2022 National General Election.

Outside the Governor General’s residence, Sinai addressed the media saying that while the writs had been signed, nominations would commence next week.

Meanwhile, hundreds of NCD Governor Powes Parkop’s supporters who had gathered to witness his nomination for re-election in the nation’s capital were all left disappointed due to the confusion surrounding the issue of writs.

Parkop expressed his disappointment when asked stating that decisions should have been made earlier in the morning.

“It’s totally unacceptable that the Chief Electoral Commissioner has created this doubt and suspense,” he said.

“He should have made a decision early this (Wednesdy) morning and made in known to the public so we are not left in doubt.”

At around 5pm Thursday, Parkop and his supporters walked peacefully from the Independence Boulevard to the Sir John Guise stadium where he was supposed to have nominated.

Parkop, as the incumbent governor, was supposed to have been the first to nominate for the NCD regional seat had the issue of writs proceeded as planned.

However, by 4pm the Electoral Commission team set up at the Sir John Guise Stadium to receive candidates’ nominations had packed up camp and left following orders from their management.

Other teams stationed in three other locations at Sir Hubert Murray Stadium, Unagi Oval and Ipi Park had also packed up and left.

Parkop said he would await advice from the Electoral Commissioner on nominations before making further announcements.