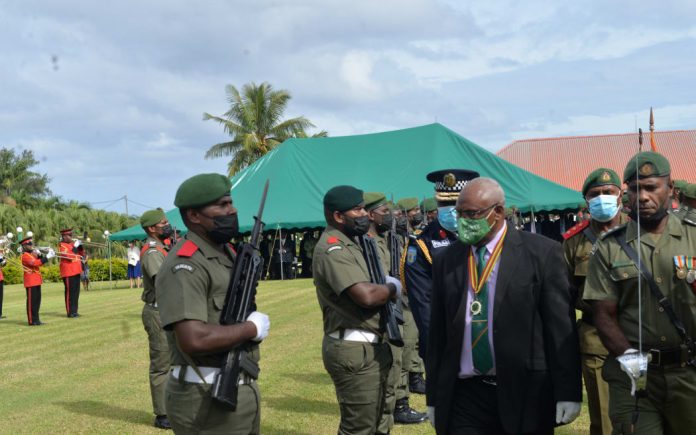 Vanuatu’s outgoing president, Obed Moses Tallis, has urged the government not to abolish the ministry of justice, warning of a “dictatorial system”.

His opening speech to parliament’s first ‘ordinary’ session of 2022 is his final duty of his mandate which will end in July.

“In my observation during my five-year term as a Head of State, judiciary in Vanuatu under the leadership of Chief Justice has played an important role in stability, growth and progress of the nation for it uniqueness of it its independency,” he said.

“To cherish the stages of the third pillar of the constitution, I urge the government to carefully consider its decision to abolish the Ministry of Justice.

In his speech, Tallis also praised the country’s frontline workers for their hard work during the community outbreak of Covid-19.

Tallis said frontline workers risked their lives and their families by being exposed to the virus.

He also hailed their efforts in challenging disinformation about the Omicron variant.

Tallis said the hard work of the frontline workers has contributed to stabilising the outbreak in the affected provinces.

Tallis told parliament Vanuatu had gone through several challenges because of the Covid pandemic.

He acknowledged the tourism sector for its contribution to the recovery of Vanuatu’s economy.

“Tourism has contributed a lot to economic growth but the only problem is that it is a fragile industry and cannot sustain us during total border restrictions which restricted the mobility and the movement of the tourists.

“We experienced a high rate of unemployment with the closure of hotels and caused financial difficulties of the family.

“The other reason why I am saying that tourism is a fragile industry is the ongoing climate change impact across the globe which could affect this industry. In my humble view, I want to see government to invest more in vibrant industry such as agriculture, fisheries and utilizing the natural resources in land and marine,” Tallis said.

He acknowledged government initiatives to redirect its focus in agriculture sector and the programme of coconut replanting and cattle restocking and the establishment of the connection of the cooperative to the local farmers in order to participate effectively in the country’s economic growth.

The Prime Minister, Bob Loughman, and the Leader of the opposition, Ralph Regenvanu, both thanked Tallis for his role as Head of State during his five years’ mandate.