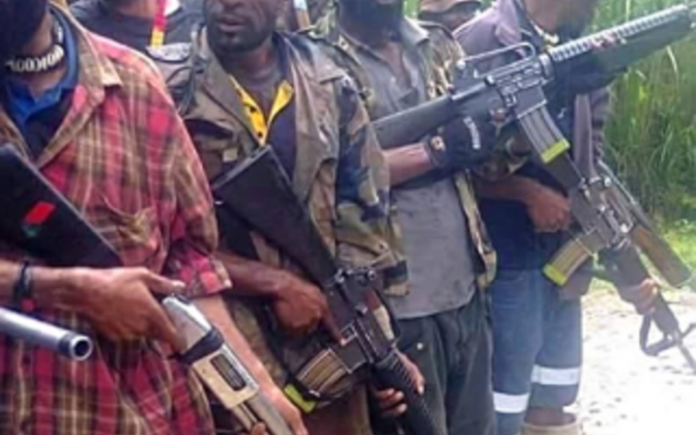 As the 2022 General Election looms, firearms are being smuggled into the Papua New Guinea Highlands region from various parts of the country, says an identified firearms dealer.

According to the dealer who is from the Southern Highland’s upper Mendi area who agreed to speak to the Post-Courier anonymously, the demand for firearms has increased significantly –– especially from intending candidates from the Highlands.

The dealer said that most weapons are supplied from Western Province, Gulf, West Sepik, East Sepik and Madang.

The Highlands of Papua New Guinea has always been known for its violent elections and the use of firearms often carried around in public.

The 2017 PNG General Elections Observation Report conducted by the Australian National University’s Department of Pacific Affairs states that election-related violence, money politics and electoral malfeasance are most pronounced in the Highlands.

“This is the right time for selling guns, when the demand is high and prices also increase. During Elections, candidates arm their supporters, who are often their tribesmen to provide security during campaigns, voting and especially during counting.”

“Previously, we exchanged marijuana with boys from the Kikori area to buy firearms, but they were smart, they started growing their own after seeing the high demand for it so now, we buy the firearms from them using cash.”

“It’s an established network and I’ve been in this business since early 2000. I usually get my guns via Kikori to Kagua then up to Mendi using the back road,” the source said.

“I have customers that come in from Hela, Enga and Western Highlands Province to purchase the guns and have my own runners who do the exchange for me.”

The dealer also alleged that he buys the ammunition from local policemen or sometimes exchanges cartons of beer with them for bullets.

The seller also alleged that he had politicians and policemen in his team and was not afraid to carry on his firearms business.

“Politicians know, I decide who my people and I will vote, they need numbers to get back into Parliament so we have a mutual understanding.”

Institute of National Affairs executive director Paul Barker says that the illegal firearms situation in the country is tragic and was allowed to fester for years due to inadequate attention by the Government.

“Partly because those involved in the gun trafficking and arming of groups, sometimes called warlords, are often closely linked to politics and politicians, helping deliver support and countering opponents, or law enforcement officials.”

Meanwhile, guns are being smuggled into the western end of the Highlands region via various routes as the demand increases with the National General Elections just around the corner.

According to sources on the ground in Southern Highlands who agreed to speak to Post-Courier anonymously, the demand for firearms has increased with intending candidates allegedly buying arms in anticipation of the elections.

In Hela, sources told the Post-Courier that they either buy guns from upper Mendi area, which is brought through the Kikori-Kagua route and transported via the back road from Kagua up to Mendi, or from Nipa Kutubu dealers who get them from Western Province.

While in Enga, sources said that guns are smuggled in from West Sepik to East Sepik and taken to Enga where they are sold.

But a man from the area said that it is not easy to smuggle guns via Enga and so, many times, the guns are transported via hired dinghies from East Sepik to Madang and brought up to Enga through the Highlands Highway.

“It depends on who you know and how much you are willing to pay, smuggling guns up the main highway is also now pretty easy,” he said.

A firearm dealer said that this is the right time for selling guns, when the demand and price is high.

During elections, candidates arm their supporters, who are often their tribesmen, to provide security during campaigns, voting and especially during counting.

A gun buyer from Komo in Hela Province said that they usually get their guns from Western Province.

He clarified that he did not sell firearms but instead bought them for security purposes for himself, his family, clan and tribe.

“From Western Province, there are two routes; they usually bring it in directly to Komo or to the Nipa Kutubu area which is easier and the often used route.

“We contribute to purchase the firearms as a tribe because it is our protection, maybe one day we will stop buying firearms but now, it is protection for our homes and our people,” he said.

Former deputy police commissioner operations Donald Yamasombi told the Post-Courier that at the time when this report was being put together, the gun’s issue –– not only in the Highlands region but across the country, was a concern to the constabulary and said that they had posted out intelligence officers to investigate the issue.