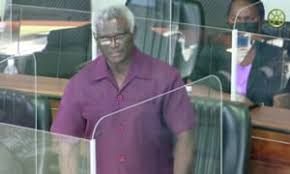 All Members of Solomon Islands Parliament are expected to visit their constituencies to explain to their voters’ government’s intention to extend the current life of the 11th Parliament.

This was revealed by Prime Minister Manasseh while responding to deliberations on the speech from the Governor General Sir David Vunagi.

Sogavare said government’s intention is to accommodate the Pacific Games and allow time to complete reforms on the political party system and the electoral system.

The PM told Parliament the idea is, after the meeting of the parliament, MPs’ will go and explain to our people what the thing (extension) is all about.

A number of MPs in their contribution to the motion announced that they will visit their constitutions after the meeting to consult their people.

Other MPs have also consulted their constituents.

Sogavare explained government’s reason for the proposed extension is based on serious issues and developments that have direct negative effect on medium to long term socio economic and political stability of the country.

They are, he said, the budgetary and practical implications of the country hosting the 17th Pacific Games in 2023, which is also the election year with expected budgetary implications.

Sogavare said reforms on the political party system and the electoral system should have been done in 2019, delayed to 2020 and now to 2022 due to the prioritisation of budget to address the global pandemic.

He added amongst the changes would also to put in place legal and structural administrative processes for out of constituency voting.

Meanwhile, opposition MP for East Are’Are, Hon Peter Kenilorea Jnr urged leaders not to lose sight of people’s right to vote in allowing them to exercise their power to do so as enshrined in the constitution.

Speaking during the debate, Kenilorea said the constitution is clear that power belongs to the people and is exercised on their behalf by the legislature, the executive and judiciary.

The MP for East Are’Are was clear in his position that he was opposing the idea to extend the life of Parliament.

He said leaders should not keep that power and right to vote from people but follow what is already in the constitution.

The Opposition MP said the very first pledge by the people of Solomon Islands in our constitution states that ‘we agree and pledge that our government shall be based on democratic principles of universal suffrage and the responsibility of executive authorities to elected assemblies’.

“Universal suffrage is all about the right to vote, this was the very first pledge in our constitution,” he said.

He said rather than looking at the issue as one of extension of the life of parliament, focus should instead be on the impacts of delaying the right to vote for Solomon Islanders.

Kenilorea said elections have their own cycle that should be separate from any other peripheral activities or government policies.

He said the mechanics of amending the constitution provided for in the constitution can be done by government with their numbers but it is important to understand the fundamental purpose of any such amendment and that universal suffrage must be upheld.

“The right to vote includes people who are not in agreement with us MPs as their representatives and they have been waiting for four years to vote us out. Four years is the remedy when the power comes back to them and so to postpone elections and the right to vote is postponing people’s power,” he said.

In that context, Kenilorea equated the situation to the legal maxim that ‘justice delayed is justice denied’, paraphrasing it to ‘election delayed is election denied, voting delayed is voting denied’.

He said this is something leaders must look closely at rather than the other peripheral issues that will impact on our decision-making.

Kenilorea also tasked the government to look into the issues he raised more clearly and objectively through the lens of the right for people to vote and not to extend the life of parliament.

“That is the lens we should look through in this matter. I am willing to contribute to this moving on as it comes to the heart of who we are as Solomon Islanders and what we are as a nation, democratic, sovereign nation of Solomon Islands,” he said.

Parliament will meet again in July.