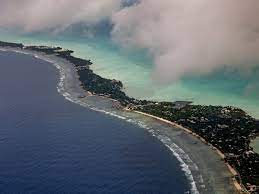 Australia could rebuild ties with the Pacific by co-hosting international climate talks in 2024 with its smaller and most vulnerable neighbours.

A report issued by the Australia Institute on Friday suggests hosting the event could ease diplomatic rifts, tackle climate change on the frontline, and bring economic benefits from tourism.

Richie Merzian, a director at the independent think tank, said partnering with neighbours on the United Nations’ largest event would demonstrate solidarity over the impact of climate change in our region.

Labor has pledged to bid to host the UN climate conference in Australia in 2024 if it wins the election, and a decision could be made as soon as November this year.

“It would be a major diplomatic feat,” Merzian said.

The Australian government could also fund the pre-conference climate meetings and hold them in the Pacific, including in Honiara.

“The question is whether the Pacific, and the Solomon Islands in particular, want to partner with Australia,” he said.

The report found Australia would need to significantly increase its climate aid, cut emissions more quickly, and rejoin the UN’s Green Climate Fund to ensure its neighbours wanted to work in partnership.

Australia stopped contributing to the fund under Prime Minister Scott Morrison, who opted to directly support $2 billion (US$1.4 billion) worth of climate projects in the Pacific and southeast Asia instead.

The tendency to refer to the Pacific region as “our backyard” as well as Australia’s lack of climate policy ambition are longstanding points of tension, the report said.

Morrison’s Solomon Islands counterpart told his parliament on Wednesday the country was being treated like kindergarten students “walking around with Colt 45s in our hands” who needed to be supervised.

Solomon Islands Prime Minister Manasseh Sogavare also said his country had been threatened with invasion by countries opposed to its recent security deal with China.

Sogavare’s latest comments mark the second time this week he has taken aim at Australia, having earlier labelled a reference to the Solomons being in Australia’s backyard as “offensive”.

While Australia’s continued support for coal and gas is particularly galling for them, Pacific leaders have regularly called out the “big brother” attitude as a major problem.

More than two years ago, Fiji’s Prime Minister Frank Bainimarama said Morrison was “very insulting and condescending” while at a leaders’ retreat in Tuvalu and risked pushing Pacific nations closer to China.