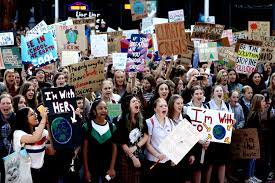 In September 2019, the streets of Auckland, New Zealand were a sea of protesters.

Across the globe, several million people were marching as part of the “School Strike 4 Climate” youth movement sparked by Swedish teenager Greta Thunberg. But few demonstrations were more sweeping than the one in New Zealand’s largest city, where up to 80,000 marchers filled the streets.

Less than two years later, however, one of the groups that organised the Auckland event is disbanding because of what it says is its own racism.

In a Facebook post, School Strike 4 Climate’s Auckland chapter said it was shutting down because it “has been a racist, white-dominated space.” It directed people concerned about climate change to Indigenous-led groups and said it would not be organising any more climate strikes.

“SS4C AKL has avoided, ignored, and tokenised BIPOC voices and demands, especially those of Pasifika and Māori individuals in the climate activism space,” it wrote. BIPOC is the acronym for Black, Indigenous and people of color, while Pasifika refers to people who identify with the Pacific islands.

New Zealand’s School Strike 4 Climate movement was criticised in March 2019, when its first strike was scheduled during a festival for Pacific Islanders. “There was a growing perception that SS4C was just an extracurricular activity for upper-class [White] kids,” Stuff, a New Zealand news website, wrote earlier this year.

The Auckland chapter did not respond to a request for comment.

The announcement comes at a time of increased scrutiny on how ethnic minorities are treated within the climate activist movement. There was outrage last year when Ugandan environmentalist Vanessa Nakate was cropped out of a viral Associated Press photograph that also featured Thunberg and three other White activists. Worldwide protests against racial injustice after the death of George Floyd have deepened the debate.

In New Zealand, there have been growing calls to place people of colour — who are disproportionately affected by climate change — at the centre of the environmental movement.

“I really commend the School Strikers in Auckland for making this decision,” said Kera Sherwood-O’Regan of Sustained Ability, a group of disabled climate activists. “… There are many other youth- and non-youth-related organisations in the climate space that could benefit from similar conversations.”

But the chapter’s decision to disband also drew some criticism.

“This is identity politics gone mad,” one Auckland woman wrote in reaction to the Facebook post, in a comment that captured the reaction of many others. “Every action, every voice is needed and valid. Begging you as a mother not to stop.”

Some within New Zealand’s environmental movement also questioned the decision.

“It is sad, disappointing, and most especially divisive,” Mary Moeono-Kolio, the Wellington coordinator of 350 Pacific, told the Guardian. “The climate movement needs everyone’s involvement and commitment.”

Her message was echoed by Sophie Handford, one of the founders of School Strike in New Zealand.

“I’m a little concerned that this sends a message of division or that not everyone is needed,” Handford wrote in an emailed statement, adding that “there is a real need to cede space to Indigenous-led [policy] … and to transform the movement so that it can properly uphold the collective aspiration of climate justice.”

Sherwood-O’Regan, who is Maori and began her climate activism at age 13, said people should see the group’s disbanding as a chance to improve the environmental movement.

“You get into a cycle where front-line community groups are expected to spend all our time essentially making … White organisations less problematic rather than actually being able to do the critical work we need to do on the ground to stop climate change and to protect our communities,” she said.

Labor faces major climate test, under pressure from the Pacific