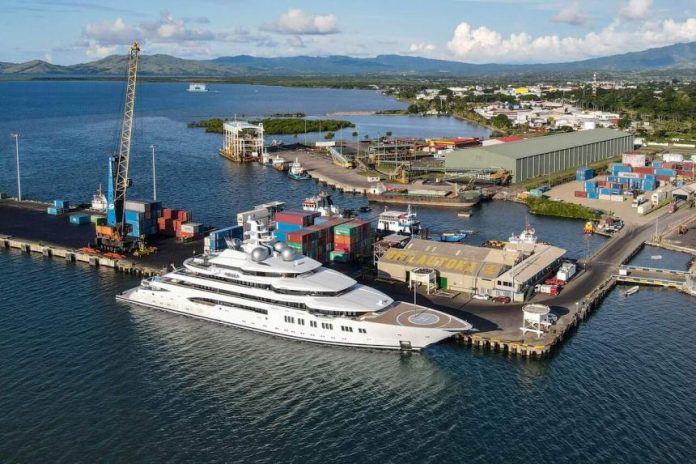 Fijian law enforcement, with the support and assistance of the U.S Federal Bureau of Investigations (FFB)I, acted pursuant to a mutual legal assistance request from the U.S Department of Justice following issuance of a seizure warrant from the U.S District Court for the District of Columbia, which found that the Amadea is subject to forfeiture based on probable cause of violations of U.S. law, including the International Emergency Economic Powers Act (IEEPA), money laundering and conspiracy.

The U.S Treasury Department’s Office of Foreign Assets Control designated Kerimov as part of a group of Russian oligarchs who profit from the Russian government through corruption and its malign activity around the globe, including the occupation of Crimea. In sanctioning Kerimov, the Treasury Department also cited Kerimov as an official of the Government of the Russian Federation and a member of the Russian Federation Counsel.

According to court documents, Kerimov owned the Amadea after his designation. Additionally, Kerimov and those acting on his behalf and for his benefit caused U.S dollar transactions to be routed through U.S financial institutions for the support and maintenance of the Amadea.

“The Justice Department will be relentless in our efforts to hold accountable those who facilitate the death and destruction we are witnessing in Ukraine.”

“Last month, I warned that the department had its eyes on every yacht purchased with dirty money,” said Deputy Attorney General Lisa O. Monaco. “This yacht seizure should tell every corrupt Russian oligarch that they cannot hide – not even in the remotest part of the world. We will use every means of enforcing the sanctions imposed in response to Russia’s unprovoked and unjustified war in Ukraine.”

“This seizure demonstrates the FBI’s persistence in pursuing sanctioned Russian oligarchs attempting to evade accountability for their role in jeopardising our national security,” said FBI Director Christopher Wray. “The FBI, along with our international partners, will continue to seek out those individuals who contribute to the advancement of Russia’s malign activities and ensure they are brought to justice, regardless of where, or how, they attempt to hide.”

“This seizure of Suleiman Kerimov’s vessel, the Amadea, nearly 8,000 miles from Washington, D.C., symbolises the reach of the Department of Justice as we continue to work with our global partners to disrupt the sense of impunity of those who have supported corruption and the suffering of so many,” said Director Andrew Adams of Task Force KleptoCapture. “This Task Force will continue to bring to bear every resource available in this unprecedented, multinational series of enforcement actions against the Russian regime and its enablers.”

“The U.S Marshals Service will continue to contribute our expertise in support of Task Force efforts to take possession of seized assets of Russian oligarchs during these forfeiture operations,” said Director Ronald L. Davis of the U.S. Marshals Service.

The seizure was coordinated through the Justice Department’s Task Force KleptoCapture, an interagency law enforcement task force dedicated to enforcing the sweeping sanctions, export controls, and economic countermeasures that the United States, along with its foreign allies and partners, has imposed in response to Russia’s unprovoked military invasion of Ukraine.

Announced by the Attorney General on 02 March and run out of the Office of the Deputy Attorney General, the task force will continue to leverage all of the department’s tools and authorities to combat efforts to evade or undermine the collective actions taken by the U.S government in response to Russian military aggression.

Upon receipt of a mutual legal assistance request from the United States, Fijian authorities executed the request, obtaining a domestic seizure warrant from a Fijian court.

The Amadea, International Maritime Organisation number 1012531, is believed to be worth approximately US$300 million or more. The yacht is now in Lautoka, Fiji.

This matter is being investigated by the FBI’s New York Field Office with assistance from the FBI Legal Attaché Office in Canberra, Australia, the Department of State’s Diplomatic Security Service, and the U.S Embassy in Suva, Fiji.

The Justice Department’s Office of International Affairs, the U.S Attorney’s Office for the District of Columbia, Customs and Border Protection, and the U.S Marshals Service provided significant assistance.

The United States thanks the Fijian authorities for their cooperation in this matter.