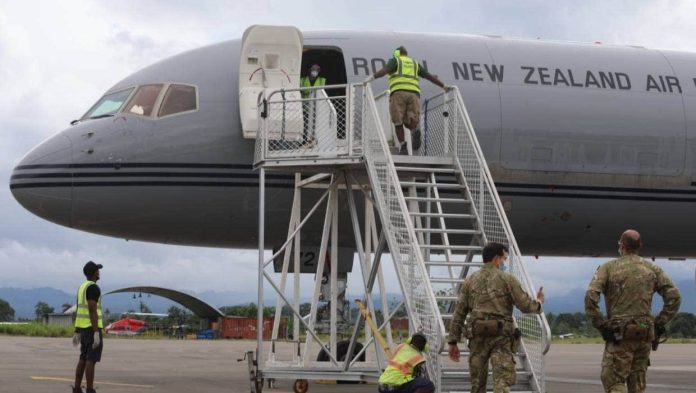 One of China’s largest defence and aerospace companies promised to upgrade almost three dozen airstrips in Solomon Islands as part of an ambitious plan to transform the Pacific Island country into an ‘aeronautical hub” for the region.

In return, the Solomon Islands government said it would purchase six aircraft from AVIC Commercial Aircraft, a subsidiary of the Chinese state-owned defence behemoth which has built small and medium-sized aeroplanes to be sold to developing countries.

The proposed exchange was laid out two-and-a-half years ago in a memorandum of understanding (MoU), which has been obtained by the ABC.

The document was signed by the Solomon Islands Minister for Communication and Aviation Peter Shanel Agovaka at Yanliang, near Xi’an in central China, in November 2019, only a few months after the Pacific Island country switched diplomatic recognition to Beijing from Taiwan.

Chinese state media reported that the minister also delivered an address at a major aviation conference which AVIC hosted in Yanliang, hailing cooperation with the company as an “opportunity and way forward” for Solomon Islands.

However, it does not appear that either AVIC or the Solomon Islands government pushed ahead with any of the initiatives in the MoU after signing it.

Solomon Airlines currently operates only one international aircraft — an Airbus A320 — and has not moved to buy any new planes from the Chinese firm. It runs three smaller Twin Otter and one Dash 8 aircraft for domestic routes.

And when the ABC contacted the CEO of Solomon Airlines, Brett Gebers, he said he was unaware of the agreement.

“I discussed this MoU with the board and, as it has not yet been presented to the board, the chairman said that he will contact the MCA [Ministry of Communication and Aviation] to find out more about it,” he told the ABC.

That stands in stark contrast to the sweeping vision laid out in the MoU, which declares: “Solomon [Islands] wishes to be part of the regional airline concept where Honiara would receive direct flights from China and become a regional hub.”

“For this vision, Solomon [Islands] needs to acquire new planes, such as MA600/MA700 and Y-12 aircraft and refurbish airfields,” it says.

The MA600 is a relatively new turboprop plane which AVIC Commercial Aircraft has already sold to a number of countries, including Laos and Benin.

The MoU also lays out an ambition to upgrade almost three dozen airstrips across Solomon Islands, saying the purchase of planes is “in combination and is linked to facilitating the upgrade of Solomon Islands domestic airfields in 2 phases. For Phase 1, up to 15 airfields; for Phase 2 the remaining 20 airfields”.

But again, there is no evidence that any of this work has begun.

The MoU was one of six agreements signed by Solomon Islands and China in the aftermath of Honiara’s decision to abandon its relationship with Taiwan and establish diplomatic ties with Beijing.

Earlier this month, China and Solomon Islands announced they had signed a security pact, stoking fears in Australia that Beijing might be intent on establishing a military presence in the Pacific Island nation.

Graeme Smith from the Australian National University told the ABC there was a “great deal of urgency in the [aviation] agreement … far more urgency than you find in many MoUs between China and the Pacific”.

He said the plan likely stalled because of the pandemic, which smashed the global airline industry and shut down most air travel into both countries.

Dr Smith said AVIC may have sensed a commercial opportunity to sell planes to Solomon Islands on favourable terms which were effectively subsidised by Chinese state financial institutions.

But he said there was also a clear “strategic push” animating the MoU.

“In the first instance this is a state-owned enterprise responding to a signal from its government to do things that are strategically in line with China’s goals,” he said.

Dr Smith believed it was also worth noting that AVIC’s commercial arm was deeply intertwined with the Chinese military, which might have an interest in scoping out airfields and other facilities in Solomon Islands.

2Defence planners (in Australia) might be somewhat concerned at the involvement of this company. I think their concerns might be how readily information could be conveyed back to the Chinese military through this commercial enterprise,” he said.

Australia and New Zealand have agreed to upgrade runways on Taro Island near Choiseul Bay and Seghe Airport on the New Georgia Islands, while New Zealand has previously funded airport upgrades at the towns of Munda and Gizo.

Japan and the World Bank are also currently funding an upgrade of the runway of Honiara International Airport.

The ABC has tried repeatedly to contact both Agovaka and AVIC Commercial Aircraft for comment, but neither have yet responded.

WCPFC to vote on skipjack harvest strategy, Parties to the Nauru...