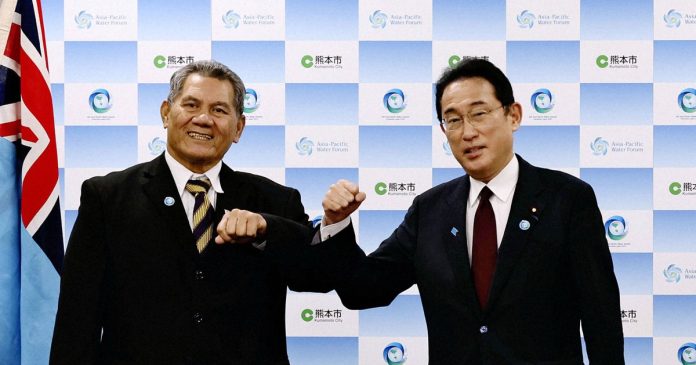 The recent signing of a security agreement between China and the Solomon Islands has sparked regional concerns about Beijing’s outreach, as the agreement reportedly enables Chinese troops to be deployed to the Pacific nation.

“We exchanged views on recent developments concerning China in the Pacific island region,” Kishida told reporters in the southwestern prefecture of Kumamoto, without giving further details.

“We are closely following what China does in the Pacific island region with interest,” he said.

The United States has warned the Solomon Islands against any possible moves toward inviting a Chinese military presence while other nations in the Pacific, such as Australia and New Zealand, have also expressed concern.

In his meeting with Tuvalu Prime Minister Kausea Natano, the two agreed to aim for a “free and open” Indo-Pacific region where an assertive China is expanding its influence.

The meeting took place on the fringes of the Asia-Pacific Water Summit being held in Kumamoto, where Kishida pledged around 500 billion yen (US$3.9 billion) over the next five years to address water-related challenges such as disaster prevention.