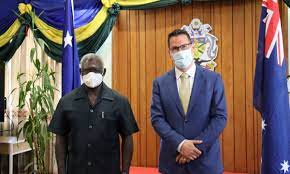 The Australian government woke up Wednesday morning to a Solomon Islands-shaped headache.

Tuesday night, news broke that the Pacific nation, less than 2,000km from Australia’s east coast, had signed a security deal with China.

A draft of the agreement, leaked on social media last month, contained concerning provisions, including one that suggested the deal could allow China to establish a military base in the country, with the draft text permitting China to “make ship visits to, carry out logistical replenishment in, and have stopover and transition in Solomon Islands”.

Before the rounds of morning radio and television were done, it was clear that Labor was determined that the Solomons-China deal would be the issue of the day.

Penny Wong lashed the Coalition when she told ABC radio the government’s handling of the situation was “the worst Australian foreign policy blunder in the Pacific since the end of world war two”.

Labor is doing its best to try to link this agreement to the government’s perceived weak spot: dropping the ball in a time of crisis.

Australia can overstate its ability to shape the foreign policy of independent countries in the region, as Pacific analysts were quick to point out.

“Appreciate Penny Wong is campaigning, but this assumes Australia has ‘influence’ over the Pacific,” tweeted Joanne Wallis, professor of international security at the University of Adelaide. “I’ve heard so many Australian ‘experts’ say that, for example, we need to ‘stop’ Solomons or elsewhere hosting a Chinese base. As though this is up to Australia.”

Scott Morrison, in full pugilistic swing at a press conference on Wednesday morning, defended his government’s record in the Pacific and said he was “pleased the Labor party are catching up on this issue” of Chinese interest in the Pacific, which was something he has “known about and [has] been taking strong action about” for years.

He also insisted his government’s response had been carefully “calibrated” to be respectful to Solomon Islands and to recognise its sovereignty.

“Our view is very much that you don’t go stomping around telling Pacific Islands what they should and shouldn’t do,” said Morrison.

Incidentally, this view may be news to some Pacific leaders, many of whom had their last in-person meeting with him at the Pacific Islands Forum in Tuvalu in 2019. Tuvalu’s prime minister, Enele Sopoaga, said he had been “stunned by the un-Pacific tenor and manner” of Morrison’s behaviour at that forum, and a furious Frank Bainimarma, the prime minister of Fiji, accused Morrison of being “very insulting and condescending” to other leaders as they clashed on the issue of climate action.

Given Sogavare’s style of governing and domestic political pressures in Solomon Islands, it seems unlikely that any ministerial intervention from Australia was going to slow down a deal that Sogavare was intent on signing.

Solomon Islands is a sovereign country with complicated domestic politics, not to mention huge economic and social challenges. There are lots of things at play that don’t have to do with Australia.

But it also offers a moment to consider whether Australia is the good partner for the Pacific that it thinks it is.

Morrison reamed off Australian contributions to the region at his press conference on Wednesday – aid to the region, Covid-19 vaccines, undersea cable projects and responding to crises, such as the recent volcano and tsunami in Tonga, or riots in Solomon Islands last year. These are all good things and important contributions Australia has made to the Pacific. But there is one area in which Australia consistently falls down as a partner: climate change, which Pacific leaders have repeatedly said is the gravest security threat it faces.

A Pacific climate envoy once described Australia’s relationship with the Pacific region on the issue of climate change to me as “dysfunctional” and “abusive” – providing aid to the region to deal with the effects of global warming but undermining attempts to halt its progress at the same time.

Labor is arguing there is more that Morrison could have done to prevent Solomon Islands from signing this deal with China, and we’ll never truly know if they’re right.

But there is something Australia can do to bolster security in the Pacific and to firm up its position as a trusted partner there: listen to its neighbours and act on the climate crisis.