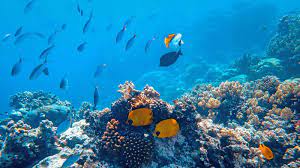 As governments around the world work to sustainably rebuild their economies in the wake of the COVID-19 pandemic, we would do well to remember that the ocean also holds as many opportunities for resilient low-carbon growth as can be found on land.

Call it the blue economy.

To date, conversations about the links between the ocean and climate change have largely focused on devastating impacts – and with good reason.

Rising ocean temperatures are turning coral reefs into bone yards and forcing fish to migrate from their native habitats in search of cooler latitudes, among other consequences of greenhouse gas emissions that are affecting Pacific Island nations like Palau and countries around the globe.

But even as ocean waters continue to warm, the High Level Panel for a Sustainable Ocean Economy has found that ocean-based climate solutions could reduce approximately 4 billion tonnes of greenhouse gas emissions annually in 2030 and more than 11 billion tonnes in 2050 – a reduction tantamount to shuttering every coal-fired power plant on earth for a year.

It is essential that we seize these opportunities to confront the climate crisis.

And we must protect and restore blue carbon ecosystems—such as salt marshes, seagrass meadows, and mangrove forests—which can sequester as much as five times the carbon as terrestrial forests per unit area while protecting coastlines from climate impacts and supporting biodiversity.

There is now a growing movement to leverage the power of ocean-based climate solutions. The Parties to the U.N. Framework Convention on Climate Change created a “home” for ocean issues in the convention when they adopted the Glasgow Climate Pact in November 2021.

Individual countries are charting their own course as well.

The United States has goals to conserve 30 percent of our ocean waters by 2030 and to deploy 30 gigawatts of offshore wind energy by 2030. It has also committed to work with countries to reach zero emissions from the international shipping sector by 2050.

Palau, for its part, has one of the largest marine protected areas in the world—the Palau National Marine Sanctuary—which prohibits activities such as fishing and mining in waters inside 80 percent of the country’s exclusive economic zone, an area roughly the size of California.

Palau was also the first country to ban sunscreens harmful to corals and to require visitors to sign a conservation pledge as a condition of entry. Furthermore, Palau has a deep history of ocean stewardship, like other indigenous peoples and local communities.

Palau is therefore a fitting setting for the seventh Our Ocean Conference, which we are co-hosting on 13 and 14 April. The event – which will be the first Our Ocean Conference held in a small island developing state – is a major moment for governments, the private sector, and non-governmental organizations to make significant new commitments to protect ocean health and security.

The importance of ocean-based climate solutions and the centrality of a healthy ocean to small island developing states – and all places where the ocean is a primary source of sustenance – will be cross-cutting themes.

Since 2014, the series of Our Ocean Conferences have mobilised more than 1,400 commitments worth more than US$91 billion and protected more than five million square miles of ocean.

We call on countries around the world to prepare major announcements for the upcoming conference that will help make 2022 a turning point in protecting our ocean, while securing healthier communities and a cleaner planet.

We are confident that this year’s conference will continue the legacy of strong commitments to protect ocean health and security—and are expecting hundreds of commitments worth billions of dollars.

As with climate action on land, progress on ocean protection ultimately hinges on political will. It is worth reminding ourselves that, at the end of the day, we are all connected by the ocean.

About the Authors: Surangel S. Whipps, Jr serves as the President of Palau, and John F Kerry serves as the United States’ Special Presidential Envoy for Climate.

There is no plan B, Kingdom of Tonga encourages spirit of...