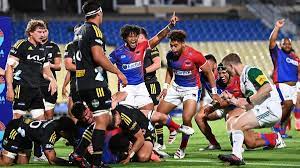 Replacement Danny Toala has scored a try in the fifth minute of golden-point extra time to give Moana Pasifika their first-ever Super Rugby win, beating the Hurricanes 24-19.

Coming off a 59-12 loss to the Chiefs last weekend, the Super Rugby Pacific newcomers were given no chance of beating the Hurricanes on Friday night despite their home advantage in Auckland.

Though they lacked possession and were camped in their own territory for most of the match, Moana Pasifika matched the Hurricanes try for try and grabbed the crucial score when the match became only the second in Super Rugby to be decided in extra time.

Moana Pasifika are making their debut in Super Rugby this season, bringing together players from Fiji, Tonga and Samoa.

In a chequered season, disrupted by COVID-19, they had played only two matches in five rounds before Friday’s match gave them their historic first win.

“We had to work hard from last week and we showed pride and passion,” said Moana Pasifika captain and Wallabies great Sekope Kepu.

“We worked really hard in the pre-season and we knew we had it in us. We just had to string it together tonight.”

The winning try came against the run of play, when replacement prop Tau Koloamatangi forced a critical turnover with Moana Pasifika in deep defence.

The ball moved to Toala and he kicked into space behind the Hurricanes’ defensive line. Rushing forward, he was able to kick the ball ahead and regain it, diving through the defence to score.

Earlier the Hurricanes had overwhelming advantages of territory and possession in the first half but Moana Pasifika defended and competed superbly.

Possession levelled out in the second half and the Hurricanes found themselves under pressure as often as they had applied pressure in the first half when penalties went against Moana Pasifika 13-1.

All Blacks fullback Jordie Barrett scored the first try of the match after only six minutes, running off a short pass from centre Peter Umaga-Jensen and scything through the Moana Pasifika defence to score.

Umaga-Jensen almost made a try for flyhalf Aidan Morgan in the 15th minute but saw it disallowed for a forward pass.

Winger Josh Moorby scored a brilliant try on debut for the Hurricanes in the 56th minute but Moana Pasifika replied in the 65th minute when Levi Aumua dashed down the left touchline to score.

The Hurricanes scored quickly through replacement prop Alex Fidow but Moana Pasifika tied the score at 19-19 with a try to Solomone Funaki three minutes from fulltime.