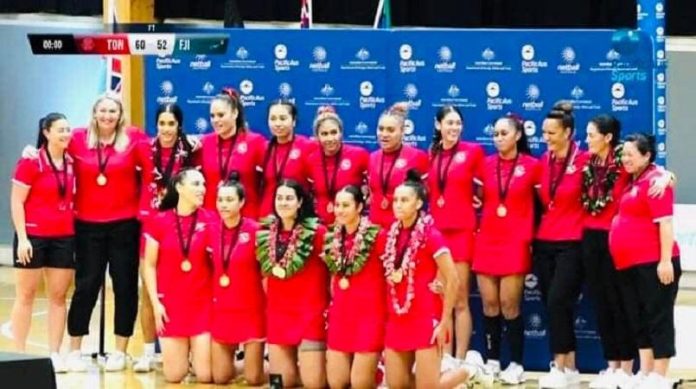 Tonga claimed gold after securing a 60-52 victory against the Fiji Pearls today at the PacificAus Sports Netball Series grand finale in Sydney.

Both teams were consistent in the first quarter and pushed each other.

While Fiji Pearls’ wing-defence Ateca Qasenivalu continued to apply pressure on the opponents, Tonga proved to be more decisive as they managed to burst into a 30-26 lead during half-time.

The pressure was intensified in the second half as the players started to be more physical.

Captain Alisi Naqiri and Ema Mualuvu fought hard to keep the Tonga shooter from scoring, but their rivals were performing better in attack and defence.

Raulini, who was on wing attack, made a significant impact for Fiji in the second half, but it was not enough as Tonga triumphed with fantastic shooting from the duo of Uneeq Palavi and Marie Hansen.

The series marked the first time the teams have competed in an international competition since the pandemic started and served as an opportunity to analyse their strategies before the Oceania Netball World Cup Qualifiers scheduled to take place in Fiji in July.

Defense & Security May 24, 2022 0
-Former Foreign Affairs Minister Winston Peters has said “serious security concerns” in the Pacific were “avoidable” in a speech where he advocated for New...