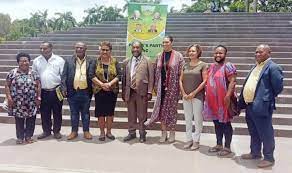 About 65 women have put up their hands to contest the Papua New Guinea General election.

They announced at the third Practice Parliament for Women in Port Moresby that they were prepared to take on the men.

The initiative is being implemented as a partnership among the Independent Political Parties and Candidates Commission (IPPCC), Parliament, Department for Community Development, Youth and Religion and United Nations Development Programme (UNDP).

Registrar of Political Parties Dr Alphonse Gelu took the women participants through their preparation for election campaigning, drawing on resources from the new IPPCC and UNDP training manual on women’s political participation and representation.

“Although candidate numbers are rising, in 2012, we had only 135 women candidates but in 2017, we had 167 women contesting and our research shows that less than 4 percent of women candidates contested the 2007 and 2012 elections,” he said.

“Historically, women are less likely to be endorsed by political parties to run for Parliament, even though the majority of MPs belong to a political party.

“My office recognises the inherent value of including women’s voices in PNG’s national legislature and other elected local assemblies.

“Because we wanted to help ensure we never again have a situation where no women are elected, the IPPCC and UNDP have been running mentoring programmes in the country to support potential women candidates and to connect them to political parties.

“Practice Parliament is now the culmination of that work as we hope to showcase their skills to the public.”
National Capital District Governor Powes Parkop said the Constitution allowed for 120 seats in the country and that “creating reserve seats for women could easily be done as equally creating 10 new electorates”.

UN resident coordinator and UN Population Fund resident representative Marielle Sander told the participants: “It takes bravery to put your hand up, to actually say you want to participate in public life (and) I commend you all for your courage”.

“I am pleased to offer the support of every UN person in this room,” Sander said.

He was speaking to The National’s about his thoughts on the shelved plan to have the five regional seats reserved for women.

“We do not want to call them reserved seats,” Gelu said.

“If we call them reserved seats, then there may be such a process that in the next four or three elections, we’ll get rid of the five seats.

“These are permanent seats – that in every elections in Papua New Guinea, we’ll have five women sitting in Parliament; five women representing the five regions that we have in PNG.

“We have run out of time to get those five seats through Parliament at this time.

“I am hoping that we’ll continue this after the election so that the new Parliament that comes in (can look into it).

“I think the good thing is that the members of the (Special) Parliamentary Committee on GBV are very proactive – in pushing for this agenda.

“That is something that we will look forward to after the 2022 General Election.”

In another development, the Electoral Commission (PNGEC) says it is bound to prepare the electoral roll before any general election.

Electoral Commissioner Simon Sinai said the commission produced its own required database for elections only.

“It (PNGEC) does not rely on any other database because we are closed in by law to do so before every general election,” he said.

Sinai said the commission had registered over 5 million voters from its database from 2017.

He added that new voters would comprise younger citizens that had reached voting age (18) from 2017 to 28 April.

The new total after completion of enrolment is expected to be around six million.

“We are updating the existing 2017 national election roll and not a new role as some think,” he said.