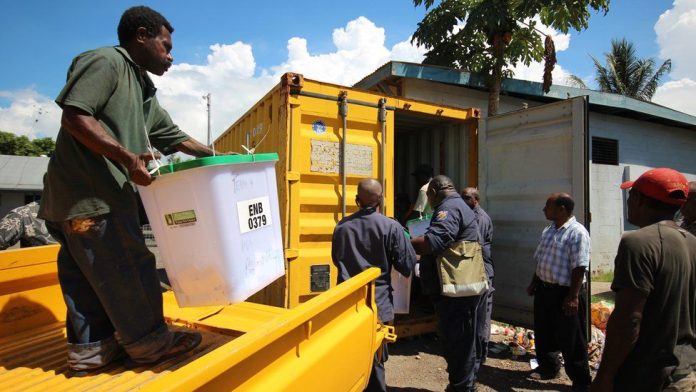 The National General Elections 2022, will be delayed by two weeks, says Papua New Guinea Electoral Commissioner, Simon Sinai. He said this delay is by caused by outstanding issues including ballot papers for the seven new electorates, and changes for the reprint runs, funding issues and COVID-19 protocols.

He has formally written to the Governor General Sir Bob Dadae requesting an extension of the election dates by two weeks.

The other issue was the electoral roll, which the Electoral Commission is expected to announce within the time frame.

Governor-General Grand Chief Sir Bob Dadae will be presented a letter requesting extension today where he is likely to make the changes.

Sinai is also seeking legal advice because of outstanding issues, specifically the funding arrangements were affected as well as the COVID-19 protocol and its issues and the newly approved electorates that need slight arrangements.

“Once the governor General gives his approval, I will announce to the nation the new changes,” he said.

“I will write to the governor-general to give me approval for the extension for a week or two,” he said.

Sinai said the extension is still within the election schedule and that there will not be any difference.

“We have to align the new open electorates and the ballot papers to be printed and then appoint returning officers to align them into elections,” he said.

“Our issue is the new electorates but more so, the funding processes to expedite the money and the rules of these funding arrangements affecting our process.

“The COVID-19 has a greater impact in the electoral process and is affecting the flow of things as well.

“We still have to run elections and we are doing our best.

“I am appealing to the people to take ownership of the process.

“We have an all-of-government approach to take into account people’s interest, so we will announce once the governor-general responds to my letter.”

Last Thursday night, Prime Minister James Marape also assured the nation that the elections will proceed as planned and that the Government will do its best to ensure funding is released on time.

“There have been skeptics saying that this government will not deliver the 2022 National General Election on time,” he said.

“As a responsible government, I’d like to dispel these doubts and inform this nation that we will deliver the election on time with a total budget of K600 million (US$170 million).

“To date, a total of K288 million (US$81 million) has been released for election preparation.

“Further funds will be released as required throughout this process.

“To facilitate a peaceful and fair election, my government has appropriated funding directly to our security agencies to effectively coordinate and manage the security aspects consistent with the operational order endorsed by the National Executive Council,” he said.

This year’s Pacific elections marginalise and isolate too many

Fiji election now chance for nation to demonstrate ‘it relies on...