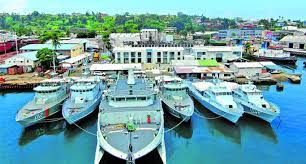 The Australian government will be assisting in the construction and development of a new naval base in Lami.

Prime Minister, Voreqe Bainimarama said the new naval base in Lami will be named after him.

He clarified this was not the RFNS Stanley Brown base in Walu Bay Suva but a completely new base that will be similar to that of the Blackrock Camp in Nadi.

“The new headquarters that will be built in Lami will be named after me, that’s what the Naval Officers were there for- to ask me to give my name to be used as the name of the new naval base.

Australian High Commissioner to Fiji, John Feakes said they will be assisting in the construction and the development of this new headquarters.

“As you would be aware, the Blackrock Peacekeeping training centre has been completed and handed to the RFMF and construction on the Maritime Services Centre in Lami will commence in June and that will take about two years to construct.”

“We are working with Australia closely, so Australia is the key partner in that but obviously we have been involved in consultations. Very excited about what that base might bring in terms of future training opportunities.”

Meanwhile, today marks 107 years since the landings at Gallipoli peninsula in Turkey during the First World War, an important national event for both Australia and New Zealand since 1916.

New Zealand High Commissioner to Fiji, Charlotte Darlow said this year’s Dawn Service was significant because people were back to pay their respects to the fallen after a two-year pandemic induced hiatus.

“It is amazing to have everybody together in person. I think after two years of not being able to celebrate ANZAC Day together, it’s such an important day for Australians and New Zealanders to be able to be here at the Cemetery together. It has been really momentous and it comes at a time when it’s really great to remember the collaboration that’s always happened between Australia, NZ, Fiji and other Pacific Islands as well.”

Australian High Commissioner to Fiji, John Feakes said about 2000 Australians and New Zealanders were killed or wounded on this day.

The Dawn Service is held on 25 April each year.

The Service is held at this time because the half-light of dawn was a favoured time to launch an attack.