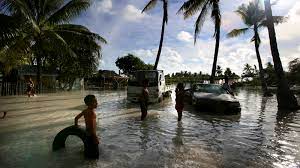 We in the Pacific have been raising the alarm about the impacts of climate change for decades, but the latest United Nations climate science report on impacts hits especially hard. The report confirms our darkest fears that humanity has already severely tested nature’s resilience and it is clear that we have already caused irreversible harm to our planet.

My people in Kiribati are effectively paying the price for the world’s addiction to fossil fuels. By 2050 up to 80 per cent of the land on the island of South Tarawa, one of the most densely populated places on the planet, may be completely inundated and these effects will result in significant loss of livelihoods and massive human displacement. Globally, most ocean reefs, including the very reefs Kiribati is built on, will have lost their ability to grow with the rising tide.

Even if global temperatures are kept within 1.5ºC as per the Paris Agreement, there will still be biodiversity losses, water insecurity, submergence of reef islands, economic decline, loss of cultural resources and heritage. And it will be the world’s poorest and most vulnerable, those who have contributed the least to global warming, who will pay the biggest price. Tens of millions around the world will be pushed into poverty as climate change disrupts their livelihoods and their environments.

The Intergovernmental Panel on Climate Change makes it abundantly clear that we still have time to reverse course and avoid future nightmares but this requires strong political commitment by polluting countries and a radical reassessment of the role of the fossil fuel industry.

Despite optimism at the COP26 climate talks this year, the world is still not on a trajectory to contain global warming. With some climate impacts becoming permanent due to global inaction over the last decades, we have only one option – rapidly cutting emissions over the next 10 years, as well as greatly increasing international finance for adaptation for communities on the front line.

However, adaptation has its limits. Some of the damages of climate change simply cannot be reversed and the international community needs a plan to ensure safe pathways for climate linked displacement. The costs of climate change are already enormous and will only increase if warming continues. We will soon reach a scenario where no amount of adaptation funding will be sufficient – and not just in the Pacific. Adaptation is not an alternative to reducing emissions and unless polluting countries cut emissions faster than currently planned, we are heading towards a worst-case scenario.

Australia’s reaction to the climate crisis, both in domestic policy and in international climate forums has been disappointing. While a net zero by 2050 target is welcome, it is a target too little and too late. We cannot help but think that politicians in Australia are fighting harder for coal and gas companies than they are for their family in the Pacific, including nations like Kiribati.

Whilst the future survival of Pacific island countries may not be regarded as relevant to Australia’s policy thinking on climate change experience has clearly demonstrated that climate change is a global problem to which Australia is also just as vulnerable. In Australia, the report makes it clear that parts of Australia will be so hot as to test the limits of humans’ ability to survive. The Great Barrier Reef, no matter how much money is thrown at it, will not survive global temperature rises.

The frequency and severity of fires will also increase in Australia with continued climate change and more and more Australians will live with water scarcity. Rich countries like Australia need to stop fighting for fossil fuels like coal and gas and embrace the alternatives that are already available such as clean, green and low cost renewable energy.

While the Pacific may be the canary in the coalmine, no country, rich or poor will be spared if we rich countries do not rapidly reduce emissions.

The depressing story told by the IPCC report is a clear and loud wake-up call that it doesn’t have to be this way. Much of what is predicted can be avoided if we act quickly and countries like Australia strengthen and, importantly, deliver rapid emissions reductions before it is too late.

Anote Tong is the former president of Kiribati.

Human ‘damage’ on the front-line of the climate crisis