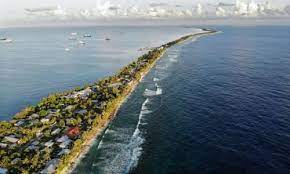 By Mark Howden and Ofa Ma’asi-Kaisamy

In the past decade the two most intense cyclones recorded to date in the southern hemisphere ripped through the Pacific. Tropical Cyclone Pam, the second worst, devastated Vanuatu in 2015 while in 2016 Tropical Cyclone Winston, the worst, ravaged Fiji. Both not only caused extreme environmental damage but economic damage worth 64% and 20% of the respective nations’ GDP.

Pam and Winston fit the global pattern for cyclones: there are proportionately more of the really nasty category 3, 4 and 5 cyclones, driven by warming oceans. And, sadly, there is no doubt that as our climate continues to change, the Pacific should brace for more extreme weather events. This is confirmed in the newest report from the Intergovernmental Panel on Climate Change, released on Monday.

The report shows climate change is already pushing some human systems and ecosystems beyond their tolerance and adaptation limits. It paints a stark picture; that climate change is adversely impacting every region in the world. More worryingly, the report shows that the most vulnerable people and ecosystems will be the worst hit, including in the Pacific. Pacific Island countries and territories are the least responsible for global warming and biodiversity loss yet they are facing the harshest consequences that will continue to worsen in years to come. Their future is uncertain if the world fails to pay attention to the report’s warnings.

Future extreme events and other changes in climate aren’t just devastating the Pacific’s environment, causing rising seas levels, more intense storms and deadly cyclones. They will also have widespread implications for key sectors including food, infrastructure, water and sanitation, marine ecosystems, disaster management, and health and wellbeing. A projected increase in the number of days of heavy rainfall by 2050 could lead to a heightened risk of water contamination, resulting in increasing incidences of diarrhoea, cholera and typhoid fever. Heat stress in the Pacific is also projected to increase with higher temperatures, leading to decreases in worker productivity and, in some severe cases, illness or even loss of life. Climate change impacts on mental health are particularly pertinent to the Pacific, with Tuvaluans already experiencing distress because of the local environmental impacts caused or exacerbated by the climate crisis, and by hearing about its potential future consequences.

The best risk reduction strategy is to limit global warming to the Paris agreement target of 1.5C. Beyond this temperature, the Pacific Islands could reach some biophysical limits to adaptation, if not already. Even achieving emissions reduction targets consistent with the 1.5C goal is estimated to result in the further loss of 70% to 90% of reef-building corals compared with today, with 99% of corals being lost or severely damaged under warming of 2C or more above the pre-industrial period.

People in the Pacific are not passively accepting the adverse impacts. Pacific Island nations have been spearheading demands for stronger commitments and are united in their calls for keeping global warming below 1.5C. They are pioneering innovative adaptation practices that are already being documented and replicated.

Nature-based solutions for adaptation of ocean and coastal ecosystems are demonstrating multiple benefits in the Pacific when well-designed and implemented. The less the planet warms, the more effective and enduring and less costly these adaptation strategies are likely to be – which is why aggressive emissions reductions are needed simultaneously with locally relevant and sustainable adaptation strategies.

A lack of local resourcing is not helped by the fact that developed country climate finance has fallen short of the US$100bn a year commitment for 2020, with the money that has been contributed overwhelmingly supporting greenhouse gas reduction activities rather than adaptation. Annual adaptation costs in developing countries alone are estimated to be in the range of US$70bn, with the expectation of reaching US$140bn to US$300bn in 2030 and US$280bn to US$500bn in 2050.

The risks from climate change will keep on mounting as long as we have our foot on the greenhouse gas accelerator globally. Pacific Islands nations have been leading the call for emission-reduction action and climate adaptation for decades. But they can’t fairly do this on their own – and nor should they be asked to. There are growing calls for developed countries to urgently dial up action on adaptation policy, finance and practice so that they keep pace with climate change. And, of course, developed countries must ramp up their emission reduction actions because while climate adaptation can take the edge off climate impacts in the Pacific, the IPCC report shows clearly that on its own adaptation will not be enough. There is a lot to do and no time to waste.

Prof Mark Howden is a vice-chair of the Intergovernmental Panel on Climate Change and director of the Institute for Climate, Energy & Disaster Solutions at the Australian National University

The big picture for our big Ocean states in 2022- thoughts...