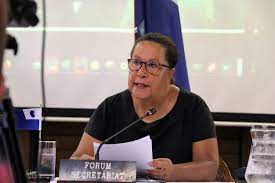 In my capacity as Depositary of the South Pacific Nuclear Free Zone Treaty (Treaty of Rarotonga), as Pacific Ocean Commissioner, and on behalf of the Council of Regional Organisations in the Pacific: we note, with deep concern, the decision by the Government of Japan to discharge the Advanced Liquid Processing System (ALPS) Treated Water from the Fukushima Daiichi Nuclear Power Station into the Pacific Ocean, and wish to highlight and reiterate the position of the Pacific Islands Forum region in relation to this matter.

For decades, Forum Leaders have expressed strong concern regarding nuclear legacy issues. At their last meeting in 2019, Leaders expressed concern for the significance of the potential threat of nuclear contamination to the health and security of the Blue Pacific, her people and prospects. They acknowledged the importance of addressing the long-standing issues of nuclear testing legacy in the Pacific, and called for the operationalisation of the provisions of the Treaty of Rarotonga.

In “acknowledging Japan’s efforts to date and its engagement with the International Atomic Energy Agency (IAEA)”, the States Parties also “recalled concerns of the environmental impact about the Fukushima Daiichi Nuclear Reactor accident in 2011, and urged Japan to take all steps necessary to address any potential harm to the Pacific”.

We are of the view that steps have not been sufficiently taken to address the potential harm to our Blue Pacific Continent, including possible environmental, health, and economic impacts. Our fisheries and oceans resources are critical to our Pacific livelihoods and must be protected.

As required under international law, and as highlighted by the States Parties in December 2020, Japan should take all appropriate measures within its territory, jurisdiction or control to prevent significant transboundary harm to the territories of our Blue Pacific Continent, including our South Pacific Nuclear Free Zone.

We therefore urgently call on the Government of Japan to hold off the conduct of the discharge of the ALPS Treated Water until further consultations are undertaken with Pacific Island Forum Members and an independent expert review is undertaken to the satisfaction of all our Members.

The Trump of Samoa