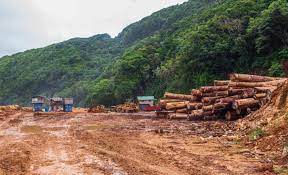 If Solomon Islands continues logging at its current rate, natural forests in the country will be exhausted in 15 years. The South Pacific nation, and its neighbour Papua New Guinea, are striking examples of the enormous cost of the logging industry on small island nations.

In the last few decades, foreign-owned companies have moved in to the Pacific region, clearing huge swathes of lush forest, exporting vast quantities of timber and sometimes leaving environmental devastation and social destruction in their wake.

Papua New Guinea, the largest exporter of wood products in the Pacific, exported 3.3m tonnes of wood – equivalent to 326 Eiffel Towers – in 2019, a haul worth US$690m – 90% of these logs are exported to China. India, the next largest destination, takes just 4% of Papua New Guinea’s logs by weight.

But even as forests are decimated, Pacific countries are often not receiving the full value of their resources. For decades the entire forestry industry in Papua New Guinea has declared just a few million dollars in profit each year on hundreds of millions in revenue. An investigation by the Oakland Institute found that some timber companies had, over decades, reported losing US$15 for every dollar in declared profits.

‘A doom covered my village’

Across the Solomon Sea, a striking example of the cost of logging is seen in the village of Naórua on the island of Malaita in Solomon Islands.

Naórua local Houka Kaiasi remembers the island he grew up on as one surrounded by green forests. He and his childhood friends would swim in clear water and fish for crabs and sea cucumbers.

Kaiasi left Naórua in 2012. When he returned in 2020 he found devastation. “It was like a doom that covered my village. The beautiful home … was all disappeared.

“I never thought that I would see a land filled with dried ground, reddish-coloured mud all over, on sites that used to be … green forests. The land [was] covered with rejected machines and unwanted logs.”

Kaiasi’s village represents both the promises and curse of logging for Solomon Islands. Large-scale commercial logging started there in the 1980s and the country has been hooked ever since.

Almost 7% of the country’s tree cover has been lost since 2000, and the Ministry of Finance says that if logging continues at its current rate, natural forests will be exhausted by 2036.

The country exported more than 2m tonnes of timber in 2019. This accounted for more than 60% of the country’s total exports that year, according to Guardian Australia analysis, and the logging industry is one of the country’s largest employers.

“Logging has been a great revenue for Solomon Islands and it has a lot of good impacts for schools, health and others,” says Dr Edgar Pollard, coordinator of the Mai-Ma’asina Green Belt conservation area. “It is like lifeblood – biggest earner in our country – and we [can] hardly cut it out.”

In Naórua, the influx of cash from logging has helped it develop. There are good roads now, he says, and people have built proper houses.

But Pollard also compares the country’s reliance on the logging industry to “a drug that the country [is] depending on”.

The archipelago is covered in logging roads, which environmental groups warn make forests accessible for poachers and illegal loggers.

And many communities never see the promised benefits. A 2013 study, for which hundreds of people across different Solomon Islands provinces were interviewed, found that agreements between logging companies and local landowners are often not upheld, as promises about infrastructure and employment are not formally written into contracts.

In May, Sam Koim, the commissioner general of PNG’s Internal Revenue Commission, announced his office was investigating 20 logging companies operating in PNG over tax compliance.

“This has been one of the sectors that is believed to have avoided and evaded tax for a long period of time. You go as far as the environment report, which was an inquiry initiated by the government of PNG back in 1989, the report points to deviant behaviour by the sector and every report thereafter also details a load of tax evasion findings,” he says.

Koim says his office will be pursuing criminal charges against companies found to be withholding tax they should be paying on logging profits, with sentences for offences of up to 15 years.

“The best outcome is prosecuting the people who exhibit or entities that exhibit clear examples of criminal conduct. We literally want to put people behind bars, that’s all. They can easily pay monetary penalties, they’re just proven to be not working.”

In Naórua, a survey was done to establish land ownership. But logging has jeopardised many major sources of food and the village is now dependent on rainwater for drinking.

Kaiasi says damage to food gardens means many families can only grow enough to fill a single pot a day. Oil has gotten into the local fishing areas and the mangroves have been destroyed. It has also caused division between communities in what “used to be the happiest society” he could imagine.

“Logging is nothing but gigantic cancer that eats a lot of our resources and [leaves] us nothing behind,” says Benjamin Kenitou, who used to work as a mechanic for a logging company on Malaita.

‘They’re back for the fourth cut’

Richard Hamilton, the Melanesia program director for the Nature Conservancy, says when problems arise it is due to the sheer volume of logging, as well as an inability to follow best practices, such as not logging on slopes and leaving buffer zones around rivers.

“In some of the areas … you have repeat logging in the same place. You might have an area that was first logged in the 70s and now they’re back for the fourth cut. Where originally they would have taken the big trees, now they are taking the smaller and smaller [ones].

“They are now doing what they call the ‘baby cut’. So they’re taking out very small trees compared to the initial logging.

“You can do sustainable forestry. But in the Solomons, communities are relatively cash poor. So there’s a lot of pressure to go back in earlier than ideal from an ecological or even a financial standpoint.”

But there isn’t much incentive to log in a more sustainable fashion. Dr Stacy Jupiter, the Melanesia regional director of the Wildlife Conservation Society, says there are companies that do practise sustainable logging and whose products are certified by the Forest Stewardship Council, the gold standard in the industry, but there isn’t a supply chain to ensure they are compensated for it.

“They are a model of how logging could be sustainable,” she says. “Unfortunately, they are barely profitable, if at all, they do not receive premium prices for their FSC-certified product, and products produced from the FSC-certified wood ultimately aren’t even marketed under a sustainability label, as the companies up the value chain do not have sustainability practices in place,” Dr Jupiter says.

OPINION: Vaccination ‘should not be a difficult choice’

The time for change is now