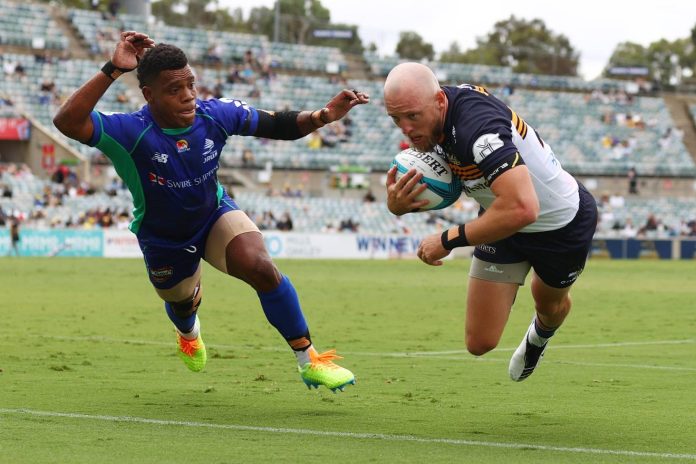 The Brumbies have turned on a ruthless display to crush newcomers Fijian Drua 42-3 in a Super Rugby Pacific blowout at Canberra Stadium.

The Brumbies were 20-0 ahead inside 25 minutes on Saturday afternoon and went on with the job, scoring seven tries in total while conceding none.

They quickly extended that advantage as fullback Tom Banks broke through for an outstanding try, running from inside his own half and burning off multiple opponents to make it 13-0.

After it looked like they’d steadied somewhat, Drua’s defence was again breached on 24 minutes as Irae Simone played a perfect ball for centre Len Ikitau to crash over the line.

The Fijians created some attack of their own with winger Vinaya Habosi producing a brilliant run and flick pass that almost put teammate through, while a second Lonergan try was chalked off by the TMO for a knock-on.

The contest turned into a fascinating forwards battle with the Drua front-row taking over at the scrum and forcing a number of penalties after their big men had been overpowered by the Brumbies’ maul.

Fullback Baden Kerr put Drua on the board minutes before halftime, knocking over a penalty for a 20-3 scoreline.

But the Brumbies started the second stanza immediately on the attack and scored after a scrum deep in Drua territory, with Ryan Lonergan sending winger Tom Wright clear to score in the corner.

Rob Valetini scored a try on 55 minutes following another lineout deep in attack while the Fijians were cruelly denied by the TMO when Ratu Rotuisolia dived over from close range and looked to have scored 10 minutes later.

They kept pressing and spent much of the game’s late stages deep in Brumbies territory searching for a try but the hosts’ defensive line held up brilliantly, before substitute winger Jesse Mogg rubbed salt into the wound with a pair of late tries in either corner.

Drua’s discipline was lacking early, conceding three penalties in the opening 10 minutes, but they steadied and won the penalty count 17-11 with their powerful scrum forcing most of those….