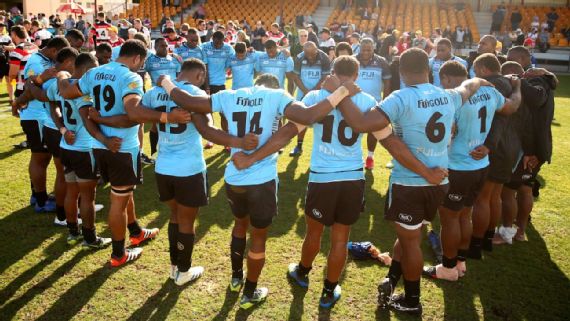 When captain Nemani Nagusa leads out the Fijian Drua against the New South Wales Waratahs on Friday it will end a long wait, and kickstart a new era for Super Rugby.

Six years after World Rugby’s Rugby Committee met in Suva to discuss ways to further support the game in the Pacific Islands, two teams from the region will feature in the southern hemisphere’s premier club competition.

A key priority within this strategy is to bridge the gap between local and international level rugby, raising the competitiveness of the national teams and providing an alternative to overseas club careers for players.

Moana Pasifika, who like Fijian Drua have a partnership with Pacific Rugby Players, had been scheduled to get Super Rugby Pacific 2022 underway against the Blues, but the match was postponed due to a COVID-19 outbreak in their squad.

That ensures Nagusa and his Drua teammates will kick off the new season when they take on the Waratahs at CommBank Stadium in Western Sydney.

“It means a lot to us in Fiji, especially for the Fijian spectators,” Nagusa said last week.

“Young Fijians who are playing in the local competitions, they can come and now have a team to work hard and try to get into to play against the world’s best in a competition that we look up to and watched as a young kid growing up back at home.

“It means a lot and it’s a huge opportunity. I’m really proud to be made captain and to be here as a Fijian.

“[The] first game against the Waratahs will force us to focus on the big plan the coaches have in place, it’s a big chance to express ourselves and show Fijian players.”

If you're going to score a match-winner, make it special! 🤩@Fijian_Drua go coast to coast against Melbourne Rebels in their first-ever trial match ahead of #SuperRugbyPacific pic.twitter.com/76nCkhyuG7

Fijian Drua and Moana Pasifika will share the £3.6 million funding package from World Rugby over an initial three-year period, which was approved in March 2021. Both teams have received additional support from their respective unions and sponsors, while there has also been New Zealand government support for Moana Pasifika.

Having two teams in Super Rugby will enhance the player development pathway in the Pacific Islands and builds on the progress already achieved through the World Rugby Pacific Challenge and Pacific Combine.

Since its inception in 2018, 75 players have graduated from the Pacific Combine and 17 have gone on to represent the Pacific Islands on the world stage, including seven at Rugby World Cup 2019.

Nine of the 40-strong Fijian Drua squad for Super Rugby Pacific 2022 have graduated from the Pacific Combine, including six named in the match-day 23 to face the Waratahs.

Second-row Isoa Nasilasila and scrum-half Simione Kurovoli will start while Mesulame Dolokoto, Viliame Rarasea, Vilive Miramira and Caleb Muntz have been named on the bench. Samoa international and ex-Western Force and Brumbies player Henry Stowers is the sole graduate featuring within the Moana Pasifika playing squad.

Coached by former Australia, New Zealand and Scotland skills coach Mick Byrne, the Drua have picked a squad for the season made up largely of locally-based talent with an average age of 25.

While only two players have previous Super Rugby experience, 10 have already represented Fiji on the international stage and 26 are already captured for the Flying Fijians. The team has been based in Lennox Head on the northern New South Wales coast ahead of their first season in Super Rugby, which has helped to create relationships and a culturally sensitive team environment as well as enable coaches to develop the technical, tactical and physical aspects of what is an inexperienced squad.

Fijian Drua will play ‘home’ matches at stadiums in Brisbane and Sydney while they are scheduled to take on the Highlanders in Suva on 30 April.

In 2017, World Rugby fully financially supported Drua’s entry into Australia’s National Rugby Championship (NRC) and the team won the title in only their second season in the competition.

London Irish forward Albert Tuisue and Northampton Saints scrum-half Frank Lomani have used the NRC as a springboard to full test honours, and the current squad highlighted their own potential with an impressive 28-26 defeat of Melbourne Rebels in their only pre-season match.

“They fly in every day at training and they’ve displayed their willingness to dig in,” Byrne said of his players. “It’s been a battle for them.

“We’ve trained probably harder than they’ve ever done in their lives, so they’re being asked to do a lot and they just get up and keep coming.”

Although Moana Pasifika will have to watch on as Super Rugby Pacific gets underway this weekend, their preparation has been no less committed.

Coached by former All Blacks centre Aaron Mauger, the team will be captained by former Australia prop, and test centurion, Sekope Kepu.

Moana Pasifika’s squad is packed full of Samoa and Tongan internationals with 31 of the 38-strong squad eligible for one of the two nations, highlighting the primary focus of aligning with the pathways of Lakapi Samoa and the Tonga Rugby Union.

The squad also features a Fijian in Timoci Tavatavanawai, a player eligible for the Cook Islands in Alex McRobbie and several Australia and New Zealand-born players with Pasifika heritage, such as Kepu and his former Wallabies team-mate Christian Lealiifano.

The team’s mission statement is to empower Pasifika people and culture around the world, and the players have clearly taken that message to heart.

What it means for them to represent Moana Pasifika was evident in the scenes, shared on social media, that greeted the announcement that Kepu would serve as captain this season.

“There is a lot of cultural emotion in everything that’s happened, but it’s learning to channel that,” Kepu said after the team’s preseason loss to the Chiefs.

“If we can marry the two together in a good mix, that we’re not getting too carried away with emotions that you don’t know your job when we roll in there, then that can sort of hinder and blind you.

“But, if we can do them both nicely, then I can tell you the team culture and morale is unbelievable, so now it’s just about getting those guys to hit the two together.”