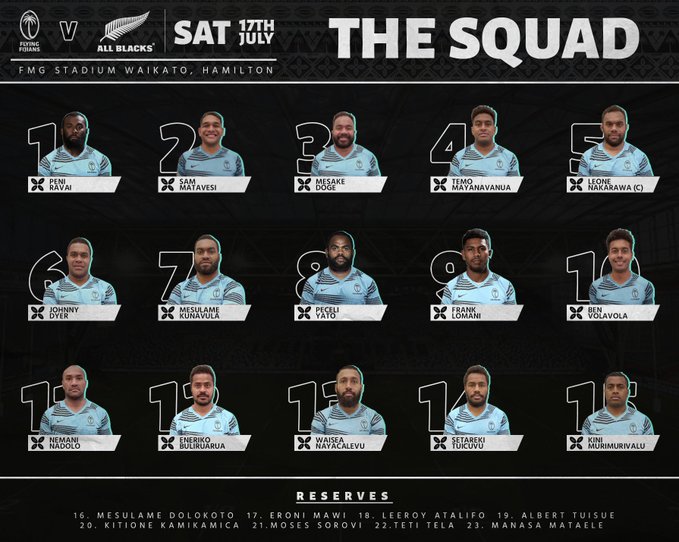 Leone Nakarawa has been given more responsibility as he will lead the Flying Fijians against the All Blacks in their final test match on Saturday in Hamilton.

Nakarawa replaces Levani Botia for the captaincy role after the hard-hitting center was ruled out due to a knee injury earlier this week.

Head Coach Vern Cotter said “Earlier in the week we knew we had a doubt with Levani Botia and we spoke to Leone. He has already been looking after the line-outs and now he takes on a wider leadership role of the whole team but he does that naturally with his excellent leadership skills.”

It will also be a special moment for France-based Eneriko Buliruarua who makes the run-on side after being named on the bench for the first test match.

Buliruarua starts at the inside center and partners with Waisea Nayacalevu in the midfield.

Robust forward Peceli Yato makes his cut at number 8 relegating Albert Tuisue on the bench, the only change Cotter has made up-front.

Cotter said “Albert sustained a minor injury so did not train fully until today.

Peceli has been given the notch and I know he is a good player. I know that Albert will give us something off the bench because we didn’t get as much as we wanted off the bench in the last match.”

In the backs, we will witness more experienced hands with the inclusion of Frank Lomani at half-back while Setareki Tuicuvu starts at right-wing replacing Eroni Sau.

“Lomani coming in brings his experience, it looks like we are playing in wet conditions so his experience in terms of when to go forward, stop, kick and control the play will be very important” said Cotter.

He added “Tuicuvu is very powerful, we know he’s strong, very quick and he also plays fullback so if there is a bit more kicking in the game, since it will be wet, he has the experience to take the ball if All Blacks start kicking down the line. I feel it’s the strength we need for this game.”

Cotter has got a powerful bench, consisting of Eroni Mawi, Mesulame Dolokoto and Albert Tuisue.

Queensland Reds half-back Moses Sorovi and Teti Tela are likely to earn their test debut off the bench.

The Head Coach said “Sorovi is a great player, he is very quick around the rugs and we like what he offers there.

Eroni Mawi and Mesu Dolokoto will offer some density to the forward pack and then Manasa Mataele can cover three positions center, wing and full back.”

Cotter highlighted that the team has worked very hard on the weakness especially in the defense which was exposed in the first match last weekend.

He added “We are very unhappy that we got 57 points scored against us.

We felt that we scored three tries and normally when we score three tries against any opposition, it should be close to winning.

It’s because we allowed those soft tries, we had a good look at how we can defend.

All Blacks have a more powerful pack for this weekend and they will apply pressure so it’s up to us to get our heads up and make sure that we defend our line with courage and passion” said Cotter.

Flying Fijians take on All Blacks at 7.05pm on Saturday.

Meanwhile, the Flying Fijian team will wear a jersey supporting Covid-19 vaccinations at their next game against the All Blacks in Hamilton on Saturday.

“I’m pleased to confirm that after comprehensive and productive discussions with the Flying Fijian players, the team has agreed to wear the playing jersey featuring “Vaccinate Fiji” message against the All Blacks on Saturday.

“We have listened to the concerns raised by some members of the squad regarding the message, and the perspective that individuals have different choices when it comes to vaccination”. In turn, we explained FRU’s position and support for the vaccination programme in Fiji, which will help save lives and assist our health authorities in the fight against the COVID-19 outbreak.

Following these discussions, the squad has settled on the “Vaccinate Fiji’ jersey, with an additional “It’s Your Choice” message alongside it. We thank them for their understanding and participation in this process.

“The issue is now settled and we wish the Flying Fijians the very best in the second Test against the All Blacks this Saturday. We are, of course, delighted by their gallant performance last weekend in the first Test, which speaks volumes about the quality of our players as well as our development and high performance programmes,” O’Connor said.

Flying Fijians second test against All Blacks: A standpoint from Coach Cotter

Breaking News July 24, 2021 0
By Makereta Komai, PACNEWS Editor in Tokyo Japan delivered on its theme of ‘United by Emotion’ for the opening ceremony of the Tokyo Games -...

All Blacks expecting tougher test from Fiji after Tonga mismatch