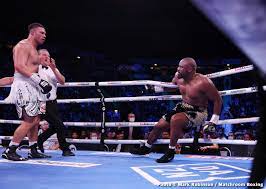 Parker, who won the first fight back in May by a controversial split decision, won this morning’s bout far more decisively, by at least two rounds on all three judges scorecards.

The former WBO heavyweight champion was particularly strong in the first half of the fight, with Chisora given a standing eight count on three occasions, in rounds three, seven and right.

But to Chisora’s credit, he stayed in the contest, refusing to go down, with Parker unable to finish off the fight.

“I just felt like it was a continuation of the first fight,” Parker said.

“He never stopped coming to the end, but we practised and practised the jab uppercut, didn’t finish it with the hook … but (to win) what a Christmas present!”

“Yeah there are always mistakes, but that’s a good thing because we can work on them and I’m so proud of him because he’s dedicated himself like he’s never done before,” he said.

The result extends Parker’s winning streak to six – and edges him closer to his goal of regaining a world title belt.

Meanwhile, Olympic bronze medallist boxer David Nyika has sent a message to the cruiserweight division with a clincal showing in his first professional bout on British soil.

Fighting on the undercard of the Parker rematch with Chisora, Nyika easily swept aside 31-year-old Frenchman Anthony Carpin.

The two-time Commonwealth Games gold medallist put his skill, speed and power on display in a dominant first round showing, after which Carpin retired in his corner.

The retirement was due to an apparent elbow injury but the French fighter’s face was evidence of the punishment he had taken, while he also absorbed several punishing body shots.

Nyika, who trained alongside Parker under new Irish trainer Andy Lee for the fight, went to 2-0 as a professional with the victory.

The 26-year-old’s first pro bout back in February was a bizzare technical knockout win over Jesse Maio lasting just 30 seconds.