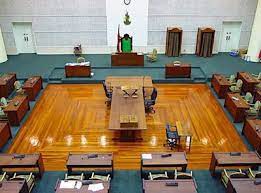 The disappointing outcomes of COP26 have shown the lack of political will from world leaders to address climate change at the global level says Civil Society Organisations in Vanuatu.

Despite the ever-increasing climate change issues impacting billions of lives around the world, governments are not committed to climate action.

The Civil Society Organisations in Vanuatu are calling out to the government of Vanuatu to take Climate Justice seriously in its actions to address climate change impacts.

The Vanuatu Civil Society strongly demands the government to officially declare a Climate Emergency as an action to acknowledge the menacing threat climate change poses to the lives of the Vanuatu people.

This call came during a consultation meeting held on the 10 December 2021 based on the climate emergency declaration for Vanuatu.

Additionally, as a complementary action to this declaration, the Vanuatu government must submit a new and highly ambitious Nationally Determined Contribution that actually prioritises Adaptation and Loss and Damage over mitigation, in the lead up to the upcoming COP27 UN Climate Conference next year in Egypt. This will cement Vanuatu’s status in the international community as a leader on climate action as well influence other affected countries to take similar actions in aims of creating a global momentum in the space of climate action.

Such momentum is crucial to magnify the voices of the front line victims as emphasised by Lorenzo Raplili from Pacific Climate Action Network and a youth climate Activist who lamented that “This year’s COP26 Vanuatu delegation were not attending and the outcome is very disappointing to us civil societies. Climate change mitigation, adaptation which includes loss and damage, climate finance, gender, and transparency are key topics of discussion and negotiations that Vanuatu government focuses mainly on were seen as nothing and useless to the eyes and ears of developed nations.” The voices of the Pacific people are falling on deaf ears.

Speaking in their first consultation meeting with different CSOs representatives, Leiasmanu Cullwick as the Executive Director of Vanuatu National Women Council said that “Vanuatu government must act with urgency, women are becoming victims of natural disasters that are worsening these days. We need everyone to take serious actions because climate change is life and death for us today. We support the call for a climate emergency declaration for Vanuatu to be tabled in parliament as soon as possible.”

“People with disabilities in Vanuatu are at increased risk of the adverse impacts of climate change including threats to our health, food security, water, sanitation, and livelihood. We also support this initiative for a climate emergency declaration.” Freda Willie, Vanuatu Disability Promotion and Advocacy Association.

With these strong messages, the Vanuatu Civil Society strongly urges the government to use an inclusive approach in its climate actions or climate governance systems that will not leave the women, youths, elderly, and LGBTQI behind. This should also include the accessibility of small grants and finance to CSOs to implement their priorities in the space of climate change. Climate action must begin in this country as well and not just at the global level.

Marie Joanita Meltebury of Pacific Islands Climate Action Network COP26 Advocacy Officer also strongly expressed, “The COP26 outcomes are very disappointing and show that world leaders are not taking the necessary climate action to protect our people’s lives and environments. Thus, this initiative will pave the way for another possible solution to this climate crisis. We cannot wait for the world leaders to act, we are going to make them ACT now!”

To date, few Nations around the world including New Zealand apart from any Pacific Islands have declared a Climate Emergency (along with 975 jurisdictions and local governments covering 212 million citizens).

The Declaration does not commit the Government to any additional financial burden, but rather expresses solidarity with existing global movements.

The Climate Emergency Declaration will be implemented in alignment with the already approved International Climate Diplomacy Strategy and the existing framework of the National Advisory Board (NAB) on Climate Change, and the Ministry of Foreign Affairs.

“A draft motion paper is already in place and we strongly call on the Minister of Climate Change and Minister of Foreign Affairs, International Cooperation, and External Trade to take into account and table it in the parliament next year 2022 in the first extraordinary session” the statement said.

Palau gets vehicles, protocol training from Indonesia ahead of Our Ocean...