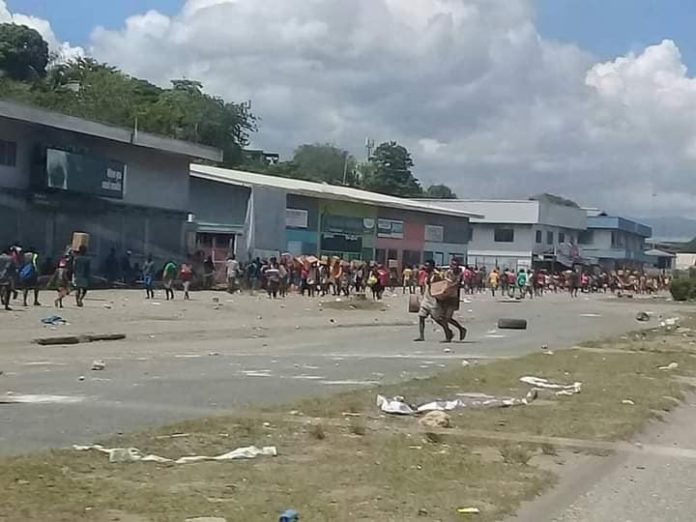 Solomon Islands’ Opposition Leader says he “categorically rejects” claims that he incited or is responsible for the unrest in the capital Honiara.

Matthew Wale is calling for the Prime Minister Manessah Sogavare to resign but denies the PM’s accusation that he encouraged people to disturb Parliament.

Speaking to the ABC, Sogavare dismissed other grievances protesters held about his government, insisting the divide over whether to recognise China or Taiwan was the sole source of conflict.

“These very countries that are now influencing Malaita are the countries that don’t want ties with the People’s Republic of China and they are discouraging Solomon Islands to enter into diplomatic relations and to comply with international law and the United Nations resolution.”

“I don’t want to name names, we’ll leave it there, we know who they are,” he said.

Sogavare also dismissed calls from the Opposition Leader, Matthew Wale, to resign and said he was “very confident” his government’s rule was secure.

“I am not going to bow down to anyone,” he said.

“We are intact, the government is intact and we are going to defend democracy.”

“That guy (Wale) is right behind all that is happening … he encouraged the people of Malaita to come over to Honiara to disturb our Parliament.”

“He is wasting his time calling for my resignation… what he is advancing is totally undemocratic.”

“I must say I categorically reject his accusation that I am behind any of this,” Wale said.

“I have never condone any violence…the people in this country feel that the democratic processes are not working for them, that their own government is the puppet of China.”

He said it was “folly” to blame foreign powers for the unrest.

“I don’t think that anyone is behind it. This is all domestic. I think it’s folly to blame anyone from outside.”

“It’s certainly is not the right way to go about it. They should spare a thought for many of the innocent victims of this tragic violence,” he said.

More police, army officers and officials from the Department of Foreign Affairs and Trade will follow today.

“He [r Sogavare] should have requested that way before, because it now appears he had prior knowledge of how bad the situation could get,” Wale said.

“I’m hoping that last night, since they have landed, that those who have been perpetrating violence and looting will have realised and gone away and stopped the violence.”

He believes Australia’s actions will ensure the PM will survive.

“Ironically, the Australian support, which we need and are thankful for, will protect him,” he said.

Meanwhile, rioters have targeted the compound of the Solomon Islands’ Prime Minister, setting one building on fire.

It’s the third day of protests in the capital Honiara, which have called for PM Manasseh Sogavare to resign.

“It’s the second building that’s on fire that everyone can see on social media. ”

“In front of the Prime Minister’s residence I can see a lot of looting, there’s [smashed] pot plants everywhere,’ she said.

There is now a heavy police presence at the property, and the residence’s main home has not been damaged by the blaze.

There is no plan B, Kingdom of Tonga encourages spirit of...