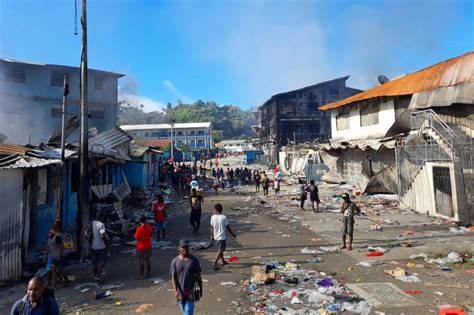 Unresolved tensions and geopolitical pressures are a volatile mix in Solomon Islands.

What began as a peaceful protest calling for the resignation of prime minister Manasseh Sogavare on Wednesday quickly descended into unrest as the crowd of about 1,000 people, many of whom travelled from the neighbouring Malaita province, grew agitated and set fire to a leaf hut in the capital Honiara’s parliamentary complex.

As police blocked protesters’ attempts to enter the parliament, using teargas and rubber bullets to disperse the crowd, reports and images started to emerge from Honiara of looting and burning buildings. The unrest seemed to abate by Wednesday night, but began afresh as crowds targeted Honiara’s Chinatown district on Thursday, setting fire to ethnic-Chinese small businesses and renewing their demands for Sogavare to step down.

The civil strife quickly escalated beyond the capacity of local authorities to control, and the prime minister made a formal request for assistance to the Australian government.

Within 24 hours, a deployment of Australian troops and federal police arrived in the country to provide immediate security assistance and re-establish order. Early indications are that Honiara woke up to a calmer scene on Friday morning, but tension lingers in the air as quelling the violence has not resolved its underlying causes.

Prime minister Sogavare has blamed the protests on “foreign powers”.

The geopolitical dimension of this latest bout of unrest is that Solomon Islands’ decision to switch its diplomatic allegiances from Taiwan to China in 2019 – accompanied by a US$500m inducement and in the process severing 36 years of ties with Taiwan – was met with fierce criticism at the time by opposition MPs in Honiara and by the Malaitan premier Daniel Suidani, who has remained a vocal critic of the switch since.

Suidani has maintained Malaita’s ties with Taiwan against the national government’s instructions and has since cultivated strong support for his position among Malaitans in the province. Taiwan’s reciprocation, and a contribution by the US in 2020 of US$25m worth of development assistance provided directly to Malaitan provincial authorities, were seen to contribute to the rift between the province and the national government.

Suidani was not present at the protests this week, but he commented from Malaita that the unrest was the result of the national government not listening to the people on matters of infrastructure delivery to the province and on the China-Taiwan switch.

Marrying the protests and associated violence to the 2019 switch resonates with Suidani’s political support in Malaita and also draws international attention to how regional geopolitical competition has affected Solomon Islands.

China’s interest in the Pacific stems from its ambition to establish itself as the regional hegemon and its longtime objective of eliminating diplomatic support for Taiwan in the region. With the switch of Solomon Islands and Kiribati in 2019, Taiwan has four diplomatic partners left in the Pacific – the Marshall Islands, Palau, Nauru and Tuvalu – out of 15 worldwide. This would be greatly concerning to Taiwan and the U.S.

But while geopolitical pressures have undoubtably contributed in a structural way to the current divisions, there is a long history of tension between Malaita and the central government. The broader context of uneven distribution of economic development across the country, and particularly Malaita’s relative lack of development compared to Guadalcanal where the capital is located, has been a sore point for decades and is widely regarded as having been at the root of Solomon Islands’ internal conflict from 1998 to 2003 known as “the tensions”.

This longstanding structural conflict was visible in how the protests started. Early reports on Wednesday indicated the protesters were primarily drawn from Malaita, and their demands were expressed along ethnopolitical lines. But as the violence escalated, a cascade of other local frustrations came into play and there was no longer a singular identifiable grievance.

Other segments of Honiara’s community started to participate – Guales were looting alongside Malaitans. The protests rapidly morphed from a provincial-national feud to a violent release of pent-up angst over daily hardships exacerbated by the global health and economic impacts of Covid. These hardships are felt acutely in vulnerable developing countries such as Solomon Islands, with the repeated imposition of states of emergency, perennial resentment at perceived corruption and brazen chicanery among MPs, and a predominantly young population frustrated with a lack of education and job opportunities.

This mix of current frustrations exists independently of the Taiwan/China switch. So too does the Malaita-central government tension. But in a community already sensitised to outside interference, perceptions of manipulation quickly gain traction and are readily absorbed into existing grievances.

Canberra would have been well aware of the symbolism of Australian troops and federal police arriving in the midst of chaotic scenes in Honiara. But the urgency of the security situation and the risk of further descent into violence called for an immediate response. The deployment has been carefully calibrated to minimise unsettling echoes of the past, and at the same time being substantial enough to restore order across the city.

The early intervention greatly reduces the lasting damage to stability and the long-term costs of the unrest. The roots of the conflict, however, can only be addressed when all parties in Solomon Islands begin to discuss a political settlement that acknowledges past grievances while setting out a path forward.

New Zealand to start reopening borders to world from January