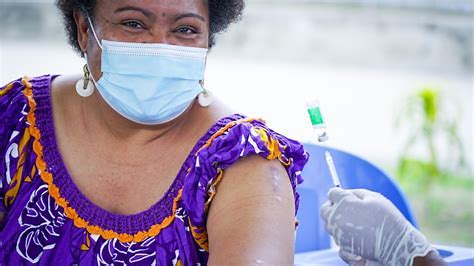 New data released by The Lowy Institute has predicted only a third of Papua New Guinea’s adult population will be fully vaccinated by 2026 as the island nation battles to stay ahead of the pandemic.

The research suggests social media has driven vaccine hesitancy in the region as platforms such as Facebook and Twitter develop into the “primary conduit for news consumption” across the globe.

“In a region where social media has become the primary conduit for news consumption, conspiracy and conjecture about the vaccine have spread faster than the disease itself,” Dayant said.

“This has fed into an already-low level of trust in formal and public institutions.”

“You could help design more targeted and context-specific campaigns across a range of platforms to convey the message (that) the vaccine is safe,” he said.

In comparison, Nauru vaccinated its entire adult population in May this year, with Fiji (more than 80 per cent) and New Caledonia (93 per cent) reporting similar numbers. Despite only having had reported one confirmed case, the Polynesian kingdom of Tonga’s vaccine rollout has still outpaced PNG.

Across the Buka Strait, the Solomon Islands have roughly 12 percent of their population double-jabbed, according to numbers from October.
There were initial fears the Pacific Island nations would “fall towards the back of the global queue” for vaccine doses, but support from Australia, New Zealand, the U.S and China has helped keep supplies high for those who want it.

Australia has sent more than one million vaccines to Fiji, including more than 200,000 doses to both Papua New Guinea and the Solomon Islands. Vanuatu has received roughly 100,000 doses from Australia, Samoa (50,000 doses) and Tonga (19,000).

However, despite vaccine support from more developed nations, the uptake of the jabs is still not correlating with the bolstered supply in some countries. In mid-September, the government of PNG donated 30,000 vaccine doses to Vietnam, after they were set to expire at the end of the month.

Healthcare workers and medical aid workers have even reported receiving death threats from rural communities who associate the vaccine with “witchcraft”. This presents another difficulty for PNG’s vaccine distribution, which is challenged by the country’s varied terrain and dispersed population.

“The conspiracy theories are really adapting as fast as the mutations of Covid itself,” said the CEO of Australian Doctors International (ADI), Mimi Zilliacus, speaking to the ABC.

“That’s in part driven a lot by a very low-level understanding of biology and science, and a background of having a culture around witchcraft and a belief in superstitions.”

The Red Cross is calling for urgent support for Papua New Guinea as a surge in cases overwhelms the island. Monash University’s Dr Rob Mitchell told Sky News Australia the situation in PNG is incredibly precarious with less than one in 25 of its adult population vaccinated.

“Although I’m in Melbourne at the moment, I’m in regular contact with emergency department colleagues throughout the country, and they are describing a really bleak picture,” Dr Mitchell said.

“In part, that is attributable to a very low vaccination rate. It’s highly likely to be less than 5 per cent countrywide.”

As of 22 November, Papua New Guinea has 1126 active cases of coronavirus and a total of 484 deaths since the initial outbreak.