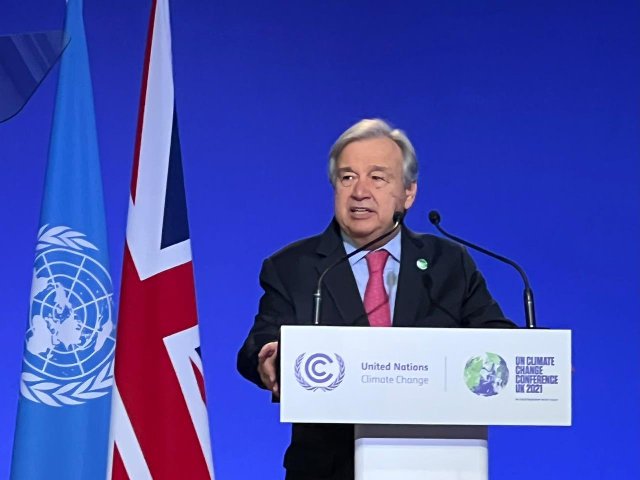 As the World Leaders Summit opened on day two of COP26, UN chief António Guterres sent a stark message to the international community. “We are digging our own graves”, he said, referring to the addiction to fossil fuels which threatens to push humanity and the planet, to the brink, through unsustainable global heating.

It was a grey and windy morning, as dozens of world leaders arrived at the Scottish Event Campus, of the key United Nations climate conference, in the city of Glasgow.

Since 6.30am, long lines of people gathered at the gates to get their accreditations, and pass through tight security, which included presenting proof of negative COVID-19 tests.

Journalists from all over the world set to work side by side in the event halls, armed with a host of microphones, cameras, lights and recording equipment.

“We want the Heads of State to be real leaders, and for them to ignite change and step up during COP26”, Juan Pablo Sierra, a young climate activist from NGO United for Climate Action, told UN News just before the ceremony started.

A live performance by young Scottish piper Brìghde Chaimbeu kicked off proceedings this morning, in the main plenary hall.

The first to speak at the ceremony which started at 12.30 pm local time, was the UK’s Boris Johnson, who made a comparison between the climate crisis, and a doomsday device featured in one of the James Bond movies, shot on set in Glasgow.

“We need to make this COP26 the moment we get real about climate change. We can get real”, he said, advocating for the end of coal and the greening of transport.

“COP26 will not, and cannot be, the end of the story of climate change”, he added, emphasizing that the work will not end, even if the conference finishes with the needed commitments.

Two young activists followed on from the Prime Minister, calling on leaders for bold action.

“You all have the power together to be better, to remember that in your words you have the weapons that can save us or sell us out. You don’t need my pain or my tears to end the crisis. We are not just victims of this crisis, we are resilient agents of hope. We are not drowning, we are fighting”, they said.

Then, Secretary-General António Guterres took the podium with a blunt opening message: “The six years since the Paris Climate Agreement have been the six hottest years on record. Our addiction to fossil fuels is pushing humanity to the brink”

“We face a stark choice. Either we stop it – or it stops us”, he added, delivering five key messages to world leaders.

“Enough of brutalising biodiversity, killing ourselves with carbon, treating nature like a toilet, burning, and drilling and mining our way deeper.”

“We are digging our own graves”, Guterres said, adding that our planet is changing before our eyes from melting glaciers, to relentless extreme weather events.

He reminded that sea-level rise is double the rate it was 30 years ago, that oceans are hotter than ever, and that parts of the Amazon Rainforest now emit more carbon than they absorb.

“Recent climate action announcements might give the impression that we are on track to turn things around. This is an illusion”, he stated, referring to the latest report on national plans to reduce emissions, known as NDCs, which indicates that even when fully met, the result would still condemn our world to a “calamitous” 2.7- degree increase.

“And even if the recent pledges were clear and credible – and there are serious questions about some of them – we are still careening towards climate catastrophe. So, as we open this much anticipated climate conference, we are still heading for climate disaster,” he emphasised.

The UN chief called for greater ambition on mitigation and immediate concrete action to reduce global emissions by 45 per cent by 2030; an effort that should be led by developed countries.

“G20 countries have a particular responsibility as they represent around 80 per cent of emissions”, he said, making clear however, that emerging economies must also go the extra mile.

“We need maximum ambition – from all countries on all fronts – to make Glasgow a success”, he added.

Guterres urged nations to build coalitions to create the financial and technological conditions to accelerate decarbonisation of the economy and the phase out of coal.

Also, referring to a key negotiating issue during this COP26, the Secretary-General said that countries must revisit their national climate plans and policies, not every five years, but every year, if commitments fall short by the end of COP26.

“There is a deficit of credibility and a surplus of confusion over emissions reductions and net zero targets, with different meanings and different metrics”, he said, announcing the establishment of a Group of Experts to propose clear standards to measure and analyse net zero commitments from non-State actors.

3. We must do more to protect vulnerable communities

Over the last decade, nearly four billion people suffered climate-related disasters, and the devastation will only grow, said the UN chief.

Guterres highlighted that adaption measures work, and that early warning systems as well as climate-smart agriculture and infrastructure, save lives and jobs.

“All donors must allocate half their climate finance to adaptation. Public and multilateral development banks should start as soon as possible”, he said.

4. COP must be a moment of solidarity

The UN chief reiterated his call for a $100 billion climate finance commitment in support of developing countries, to become a reality.

He said delivering on that promise made at COP15 in Copenhagen, was critical to restore trust and credibility, but beyond that, developing countries need far greater resources to fight COVID-19, build resilience and pursue sustainable development.

A number of countries have made credible commitments to net zero emissions by mid-century, may have pulled the plug on international financing of coal, and over 700 cities are leading the way to carbon neutrality, he said.

The Secretary-General said the private sector is also waking up and building new alliances to catalyse change.

“The climate action army – led by young people – is unstoppable. They are larger. They are louder. And, I assure you, they are not going away. I stand with them”, he said.

Guterres warned that we are fast approaching tipping points that will trigger escalating feedback loops of global heating, but investing in the net zero, climate-resilient economy, will create feedback loops of its own — virtuous circles of sustainable growth, jobs and opportunity.

“On behalf of this and future generations, I urge you: Choose ambition. Choose solidarity. Choose to safeguard our future and save humanity”, he concluded.

‘We are the greatest problem solvers to have ever existed’: Attemborough

Following the UN Chief, COP26 people’s advocate David Attenborough delivered a passionate speech which was accompanied by clips of activists around the world.

“We are, after all, the greatest problem-solvers to have ever existed on Earth. We now understand this problem, We know how to stop the number rising, and put it in reverse. We must halve carbon emissions this decade. We must recapture billions of tonnes of carbon from the air. We must fix our sights on keeping 1.5 degrees within reach”, he said.

“In my lifetime, I have witnessed a terrible decline, in yours, you could, and should witness a wonderful recovery. That desperate hope, ladies and gentlemen, delegates, excellencies, is why the world is looking to you and why you are here”, he underscored.

Later in the day as leaders made national statements, U.S President Joe Biden, said that world leaders could keep the goal of limiting global warming to 1.5 degrees if they come together and commit.

“Glasgow must be the kick-off of a decade of ambition and innovation to preserve our shared future”, he said, reminding that climate change is already costing nations millions of lives and dollars.

The US leader said that his country will be announcing new commitments over the next few days to mobilise action. These will include measures on the agriculture, oil and gas, and forestry sectors.

He also announced that he will release soon a long-term plan enabling the US to become net zero by 2050.

“We’re still falling short…there is no more time to hang back or sit on the fence or argue amongst ourselves. This is a challenge of our collective lifetime”, he emphasised.