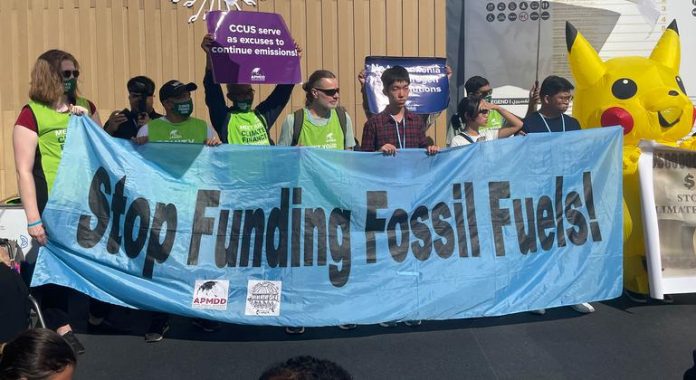 As loss and damage shapes up to be the top issue on the agenda at COP27 in Sharm El-Sheikh, a new report by Greenpeace Australia Pacific has found just one year of subsidies handed out to the fossil fuel industry in Australia could fund the loss and damage caused by a decade of cyclones in Fiji.

Between 2010-2020, Fiji was hit by nine cyclones costing AUD$1.66 billion (US$1.06 billion) in loss and damage. Greenpeace’s Lost time and Damaged Reputations report has found that the AUD$11.6 billion (US$7.45 billion) spent on fossil fuel subsidies in 2021-22 could fund the redress of these damages six times over.

However the issue of loss and damage currently being debated at COP27 goes beyond damage quantified in economic terms, says former president of Kiribati Anote Tong, highlighting that loss and damage is also about loss of heritage and everything Pacific Islanders identify with.

“What is happening and what is predicted to happen is going to be a huge challenge to people who would be losing their home and everything that they currently have.”

“We’re talking about huge losses, whole families. At some point in time, maybe the entire nation. Some of it you can count in monetary terms and some of it you cannot because it’s irreplaceable. That’s what Pacific countries have been trying to incorporate into the negotiations.”

Since the early 1990s, Pacific island nations have fought for a funding mechanism to compensate for losses and repair damages caused by climate change. However, Greenpeace Australia Pacific’s report has found that for three decades, progress on establishing a mechanism to provide this finance has been blocked by the very countries most responsible for climate change – including Australia.

Former Prime Minister of Tuvalu Enele Sopoaga said if Australia is hoping to host a COP, it has the responsibility to seriously make up for the deficit of trust that has been caused in the past and is still being caused even after speaking to the Pacific Island Forum.

“In order to garner that recognition Australia has to do much better. Right now, I cannot support that Australia should host any COP, unless it comes up with these improvements, including a commitment to support loss and damage finance.”

Shiva Gounden, Pacific advisor at Greenpeace Australia Pacific, said that establishing a loss and damage finance facility is the major issue at COP27, but a big question still looms over where Australia stands.

“he Albanese government has made some big pledges about strengthening ties with its Pacific neighbours, but the time for talk is over. If the Australian government is serious about co-hosting COP31 with Pacific nations, it must hear what we have been calling for for thirty years and support establishing a loss and damage facility at this COP.

“Since the early 90s, Pacific Island nations have been at the forefront of the fight for loss and damage funding. We can no longer kick the can down the road on funding to compensate countries suffering the worst climate impacts but contributing the least to the climate crisis.

“This is about real losses and damages to our lives, livelihoods, lands, and cultures. In Samoa there is a beautiful tradition where the umbilical cord is buried on ancestral land, creating a connection to land and culture from the beginning of life. But due to climate change, these lands are being washed away and this precious connection is lost forever. This is loss and damage.

“Loss and damage funding is an idea whose time has come. COP31 matters, but action at COP27 matters more. Australia must step up for its Pacific family and commit to a loss and damage finance facility at COP27 if it wants to earn COP31.”

Taren Chilia, a 20-year-old climate activist from Vanuatu, said “Loss and damage” in my world isn’t about talks and debates once a year. It is real and it is lived every single day.

“I am proud to be from Vanuatu, where the concept of loss and damage first came from. This is an idea born in the Pacific and our voices as Pacific Islanders on the frontlines of this climate crisis must be heard. We cannot run away from this. We cannot keep waiting for yearly talks and debates. We must act now.

“Countries around the world and our neighbours like Australia must support dedicated loss and damage funding at this COP. The time for action on climate justice is now,” said Chilia

COP27: $3.1 billion plan to achieve early warning systems for all...

Countries step up on global climate justice case ahead of COP27...