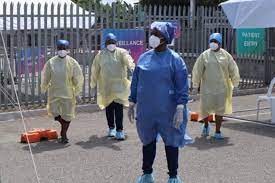 The latest surge has seen the highest number of daily COVID-19 cases recorded since the beginning of the pandemic.

“Hospitals are full, and patients are being turned away in Port Moresby and provincial areas. Urgent efforts and further support are needed in healthcare to prevent a massive loss of life in the coming days and weeks.”

“In all areas of PNG, we are deeply concerned that the risks of hospitalization and death from COVID-19 are skyrocketing due to limited health infrastructure, high rates of illness, all compounded by poor access to safe water, hygiene and sanitation facilities.”

The vaccine rollout, that has helped to contain the virus in other countries, remains extremely low in Papua New Guinea due to a range of issues, including misinformation, public apprehension, and logistical challenges with the rollout. Only 1.5 per cent of the population has received at least one dose of the vaccine, with 0.67 per cent fully vaccinated, according to Oxford University’s Our World in Data.

PNG Red Cross is supporting efforts by the government and health authorities to contain the spread of the virus, distributing personal protective equipment such as face masks and providing targeted support to some of most vulnerable in the community who have been confined to their homes by the virus.

“If this COVID surge continues at such an alarming speed, PNG’s fragile health system is at risk of collapse. It is vital that emergency healthcare services are increased to prevent greater suffering and loss of life.”

“We need to respond to the pandemic of misinformation that is spreading alongside the virus. We need to urgently inform people about the benefits of the vaccine, while speeding up the challenging rollout of vaccinations in all areas of PNG, from the highlands to coastal villages,” he said.

Meanwhile, the head of the Australian medical assistance team (AUSMAT) in Papua New Guinea says the COVID-19 situation is the worst he has seen on his three deployments to the country since the pandemic began last year.

Dr Mark Little is heading the AUSMAT team that was deployed to PNG last week and told Pacific Beat that hospitals across the country are running over capacity to care for a surge in COVID-19 patients.

“The latest World Health Organisation numbers talk about 2868 active cases but my sense is that it is much higher than that…often we’re not getting accurate numbers away from the provincial centres,” he said.

The AUSMAT team was deployed after a call out by the PNG government for help from international medical teams.

He is pleading with people to get vaccinated to bring the country’s COVID-19 outbreak under control.

“The people of PNG we really need to get vaccinated…the only long-term way out of this crisis is vaccination,” he said.

COVID-19 infections are spiralling out of control in Papua New Guinea and one of the hardest-hit hospitals is in Goroka, the capital of Eastern Highlands Province.

Emergency oxygen supplies and extra health workers were helicoptered into the town two weeks ago, as beds ran short and patients slept on the floor.

PNG woman Margaret Vangana lives in Sydney but was motivated to launch a fundraising campaign for the Goroka Hospital after seeing local media reports of the unfolding crisis.

She has a background in biomedical science, her parents are both health workers and her mother is based in the PNG capital Port Moresby.

“I sat around thinking what can I do, I’m living in Sydney and like we have all these resources here, I could do something,” she told Pacific Beat.

She aims to use funds raised to buy and send masks, personal protection equipment (PPE) and other supplies including beds, for patients and frontline workers.

They have already raised more than AUD$4,500 (US$3,368) and received support from the indigenous and wider Pacific community in western Sydney, as well as well-known New York-based anthropologist Paige West.

Vangana said they hope to send a shipment to Goroka by the end of the month.

Dr Joseph Apa, who heads the Eastern Highlands Provincial health service said other donations of money, oxygen tanks, medicine and PPE have also been flowing from large businesses in PNG and the expatriate community in New Zealand.

He welcomed the donations but said that it is difficult to stop the virus from spreading into the remote districts, especially with only about three per cent of the population vaccinated.

“We have experienced a lot of deaths in the communities,” he said.