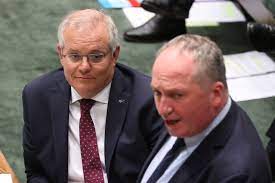 Australia’s decision not to boost its 2030 emissions reduction target will disappoint key allies that have called on Prime Minister Scott Morrison to do more ahead of next month’s United Nations climate summit in Glasgow.

Morrison told Parliament on Monday he would stick with the target that he took to the 2019 election, which was set by former prime minister Tony Abbott in 2015, to reduce emissions by at least 26 per cent from 2005 levels. His decision comes after Nationals leader Barnaby Joyce on Sunday all but ruled out support for a higher 2030 commitment.

British cabinet minister Alok Sharma, who will head the COP26 climate change conference, has called on Australia to set a 2030 emissions reduction target of up to 50 per cent. The United Kingdom has committed to cut emissions 68 percent by 2030 while the United States has set a goal to reduce emissions by 50 per cent and urged Australia to increase its near-term target. Japan is targeting 46 percent, South Korea 40 per cent and the European Union 55 percent.

Climate scientists say deep emissions cuts by 2030 are needed to achieve the goal of the Paris Agreement to limit global warming to less than 2 degrees, and as close to 1.5 degrees as possible to avoid the worst damage from climate change. Waiting longer to reduce greenhouse gases will allow too much carbon to build up in the atmosphere and cause heating long after 2050, even if net zero is achieved by then.

The government’s “technology not taxes” policy is focused on investment in low-emissions technologies to replace current carbon-intensive systems.

Morrison told Parliament many of the technologies had “long lead times” and there was “no linear trajectory” to net zero. He also warned against Labour’s 2019 election policy to cut emissions 45 percent by 2030, which the party has since dumped.

But business groups, investors, church leaders and farmers have all urged the federal government to increase its 2030 commitment.

Liberal-aligned think tank Blueprint Institute, which surveyed voters in resources seats over the past two weeks, found 67 percent of respondents in Capricornia and 68 percent in Flynn – both central Queensland electorates – backed a halving of Australia’s emissions by 2030. In the NSW seat of Hunter, 74 percent were in support along with 76 percent in Gippsland, Victoria.

Faith leaders representing major denominations on the National Council of Churches in Australia wrote to Morrison on Friday, calling on him to commit to a 2030 target to cut emissions by at least 50 percent and up to 74 percent.

“It is critical that we act now. For the love of God, for the love of creation and for the love of our neighbours, we must take steps that will limit impacts of climate change, so that all who make their home on earth can flourish,” Reverend Sharon Hollis of the Uniting Church in Australia said.

Charlie Prell, chairman of Farmers for Climate Action, one of the largest primary producer representative groups in the country, said committing to net zero by 2050 was a “big step that I don’t want to diminish the importance of”, but he said the Nationals were “kicking the can down the road” by rejecting a 2030 target.

“I don’t understand how they are saying ‘show me the plan’ when they are in government.”

A report released on Monday by the Asian Investor Group on Climate Change, Ceres and the Investor Group on Climate Change, which represent investors with a cumulative $62 trillion in assets, called for G20 leaders including Australia to set ambitious 2030 targets. It said Australia was among the least attractive countries for green investment, alongside Argentina, India, Indonesia, Mexico, Russia and Saudi Arabia.

“Institutional investors with a lot of cash are making judgments on investment attractiveness based on macro policy,” he said. “Investors want to plug numbers into spreadsheets to determine climate risks in their investments, but you can’t do that without a target.”

The Business Council of Australia, which represents major banks, big miners, and other large corporations, last week called on Australia to boost its 2030 emissions reduction target to at least 46 per cent and up to 50 per cent below 2005 levels.

Analysts say state renewable energy drives will replace a lot of coal power and are expected to drive enough carbon cuts to enable a 35 percent 2030 target.