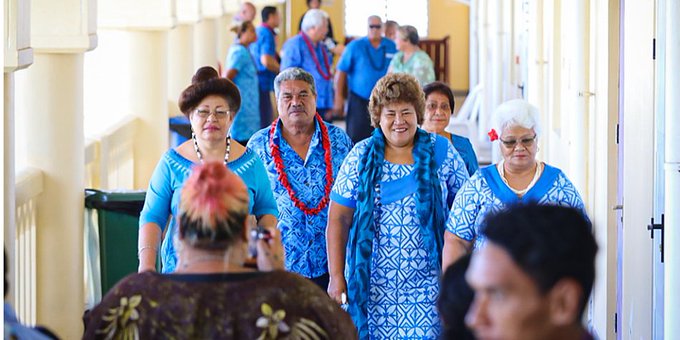 Samoa Supreme Court has ruled in favour of the Human Rights Protection Party (HRPP) and ordered the Speaker of the House to swear in the party’s members who were elected in April’s national poll and have not been knocked out by post-election legal challenges.

The orders conclude a hearing of the declaratory order application filed by HRPP members against the Speaker of the House, Papali’i Lio Masipau for not allowing the HRPP to be sworn in.

“The [Speaker of the House] has an obligation to administer the oath of allegations under standing order 14,” the decision read.

“The respondent is obliged to carry out the obligation forthwith to fulfil the requirements of Article 61 of the Constitutions.

The costs are reserved and the court will issue its reasons as soon as possible.

“It is the court’s role to interpret and protect the constitution,” the Justices said.

‘We do not accept that duly elected Members of Parliament pursuant to the Constitution to be refused to attend Parliament and be duly sworn in and such denial cannot be protected by the principle of non intervention, said the Chief Justice.

“The matter was heard before the court on the pickwick basis, given the “urgency and importance.”

A total of 18 HRPP members were unsworn due to a decision taken by the Speaker of Parliament, Papali’i Li’o Ta’eu-Masipau.

The Speaker of the House, informed the former ruling party of his decision to disallow their unsworn Members from this week’s parliamentary sitting in a letter delivered on Monday: the eve of the new parliamentary term.

HRPP initially secured 25 seats in the April election but seven by-elections have been called after the party’s Members-elect had their victories challenged in court, thus voiding their elections and giving rise to by-elections.

The party this week protested the exclusion of its representatives from Parliament on Tuesday by the Speaker, who had refused to swear-in their elected representatives.

The decision left 18 HRPP members outside the Parliamentary precinct amid a heavy Police presence blocking their entry to the Legislative Assembly, as proceedings, including the tabling of the national budget, continued.

In a letter to the HRPP’s leader, former Prime Minister Tuilaepa Sa’ilele Malielegaoi, dated 13 September 2021, Papalii gave his reasons for rejecting the request from the party to take their oath of allegiance for office when Parliament sat this week.

The party had previously sought to be sworn into Parliament by the Head of State, not the speaker himself, in contravention of standing orders.

Papalii’s letter noted the party’s numerous broadcasts showed their continual opposition and non-acceptance of the current Government led by the FAST which was sworn-in on 24 May 2021.

“Your unceasing refusal to accept the swearing-in which occurred on the mentioned date also means that you do not accept my position as Speaker,” he said.

“Because of these reasons, a swearing-in of the Human Rights Protection Party will not take place at the Parliament sitting on Tuesday 14th September 2021.

“Since there will be no swearing-in on Tuesday, your Members who have not been sworn in will not be allowed to attend the sitting.”

The Speaker said his decision was made in accordance with Parliamentary Standing Orders and the constitution.

Tuilaepa deemed the reasons a “weak excuse” and said that the party would be mounting a legal challenge.

Undersea volcano sends plume of steam into the skies near Tonga