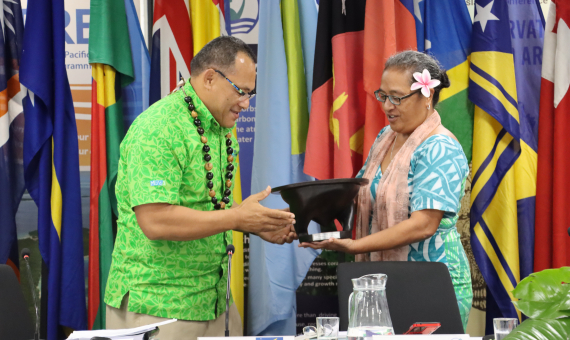 The 30th Meeting of Officials of the Secretariat of the Pacific Regional Environment Programme (SPREP) has officially concluded after three days of deliberations.

The Secretariat’s 26 Members – comprising of 21 Pacific island and five Metropolitan countries and territories – met virtually over the last three days to discuss strategic, programme and governance issues pertaining to the organisation, and approved the 2022-2023 work programme and budget.

The meeting ended on a rather emotional note, with Kosi Latu addressing the SPREP Meeting for the last time as the Director General of the Secretariat. Latu’s contract will end in April 2022, whereby the newly appointed Director General,Sefanaia Nawadra, will take over for the next six years.

Mika Perez of Tokelau, Chair of the 30th SPREP Meeting, expressed on behalf of the SPREP Members their gratitude to Latu for his leadership over the last six years, and wished him well on his future endeavours.

“The Director General reminds us to not forget our collective responsibility towards one another, not only in countries alone but also at a regional level. After all, the Pacific is not only our Ocean, it is our Home,” Perez said.

“Since this will be your last Meeting, from the bottom of our hearts, we Members of the region say thank you, fakafetai lahi tele for the last six years. It has been very fruitful and productive working with you for those of us who know you on a personal and professional level. We say thank you very much for your time.”

As a token of their appreciation, Tokelau on behalf of Members and delegates presented Director General Latu with a gift to convey their gratitude and appreciation for his years of service to the Pacific.

Latu congratulated Tokelau for being an exceptional Chair, and for steering the Meeting through what was a challenging agenda which reflected the variety of environmental challenges faced by Pacific island countries.

Latu said that although countries in the Pacific seem to be doing a lot to try and save, protect and manage their environment, the irony is that the Pacific is seeing greater environmental degradation happening in our region.

“This is a major concern not just for me but for all of us who love our ocean and our islands and our region.”

He concluded his final remarks by thanking the SPREP Members and staff for their support, advice and guidance throughout his years as Director General. He also thanked the Chair for reminding them all of his remarks given during the opening of the 30th SPREP Meeting of the need for the Secretariat to be responsive to its Members.

“I’m happy to pass that on to the new incoming Director General to remind him that this is why SPREP is here and why we exist – to respond to the needs and requests of our Member countries,” Latu said.

“My ambition when I started at SPREP was to leave it in a better place than I found it. I wouldn’t say SPREP is now in a perfect situation as there will always be challenges and there will always be room for improvement, but I’d like to think that in the last six years that I’ve been at the helm of this organisation that we have been able to make some significant changes to the way we work, the way we engage with our Members and partners and that SPREP is in a much better place than it was six years ago.

The Third Executive Board Meeting will be held on the first week of September 2022, in accordance with the governance structure of SPREP which states that the full SPREP Meeting of Officials will shift from being convened annually to biennially, with a meeting of the Executive Board to be held every other year.

The Executive Board of SPREP is comprised of the Troika of past, present and future Chairs of the SPREP Meeting, and representatives of SPREP’s Melanesian, Metropolitan, Micronesian, Polynesian and French speaking members.