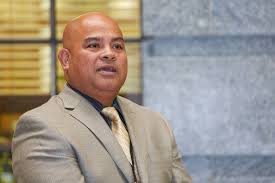 Authorities have arrested a man who threatened to assassinate Federated States of Micronesia (FSM) President David Panuelo, in his social media posts.

The FSM government did not release the name of the suspect, who has been charged with “making threats of bodily harm” and “retaliation for official action.”

“You gona need an army to protect you from now and on You will be assassinated for sure. Mark my word, President,” the comment read.

According to a statement from the FSM government, the national police investigators were able to link the defendant to the Facebook account, which appears to have been taken down.

“The investigators, in joint cooperation with the U.S Federal Bureau of Investigation et al., were able to reach out and secure critical pieces of information from Facebook, Google, and other relevant entities, regarding this matter,” the government said.

The “criminal” comment was posted under a government announcement mandating Covid -19 vaccination for all eligible FSM citizens.

FSM officials said citizens are encouraged “to freely express differing views on matters of public importance, to include the use of colorful and expressive language when one holds a particularly passionate view, as the freedom of expression is sacrosanct.”

FSM officials acknowledged that not every government decision, such as the Covid-19 vaccine mandate, will be popular.

“It is healthy, proper, and appropriate for citizens to engage in spirited debate (i.e. the exchange of views) and dialectic (i.e. the art of investigating or discussing the truth of opinions) on topics of public interest,” the government stated in a press release.

However, officials reminded the public that “making threats of bodily harm against any person, or any public official for that matter,” is a crime punishable with up to 10 years of imprisonment.

“The Panuelo-George administration promotes transparency and accountability in public service, but the law cannot, will not, and does not tolerate threats of physical harm to citizens and residents, including those directed against the head of state and head of government,” states the statement from the Office of the President.

After being confined in jail during the weekend, the man was released on probation pending trial.