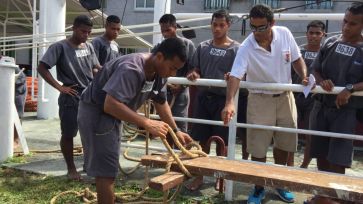 Kiribati Minister for Employment and Human Resource has assured Government will try its best to ensure that the South Pacific Marine Services (SPMS) does not leave the country before end of this year.

Taabeta Amuera Teakai made the assurance to seafarers and their families who marched to Parliament House last Thursday to request government to convince SPMS not leave the country.

SPMS has announced it will leave the country at the end of the year.

SPMS has been providing recruitment and employment of Kiribati seafarers overseas, particularly on German merchant ships for more than 50 years.

Hundreds of Kiribati seafarers stranded overseas are pleading with their government to allow them to return home as the country continues to shut its border to international flights.

With a COVID-19 outbreak sweeping Fiji, 165 seafearers been confined to their hotel in Nadi where their meals and room is paid for by the German shipping company they work for.

But since arriving in Fiji their basic wages have stopped and the men can no longer send money home.

Their situation has prompted a consortium of German shipping companies to terminate a decades long agreement to train and recruit i-Kiribati workers.