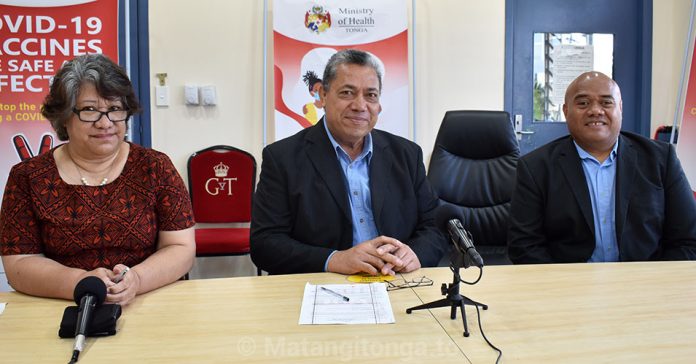 These doses would be sent to start vaccination rollouts in Ha’apai and the Niuas.

Another batch of vaccines was expected from Australia, and New Zealand also had plans to provide the Pfizer vaccines, which the Ministry of Health would use to vaccinate children aged 12 to 17 years old and pregnant women.

Minister for Health Dr ‘Amelia Tu’ipulotu said Tonga had been very fortunate to receive support from COVAX and other countries.

“I thank the governments of Australia, New Zealand, Japan, China, and other countries and orgnizations for supporting Tonga during this difficult time.”

Tonga’s aim at the moment is to vaccinate 63,128 of Tonga’s population over the age of 18 years.

Once the Pfizer vaccines arrived from New Zealand, the target will increase to around 70 percent of Tonga’s population, which will include 12-17 years old age group.

There had been only a small number of serious adverse reactions recorded by the Ministry after AstraZeneca COVID-19 vaccinations were administered.

However, they were not caused by the vaccine, said Dr ‘Ana ‘Akau’ola.

She explained that the Ministry recorded any adverse reaction that happened soon after inoculation, even if it was not caused by the vaccine.

This included the death of a 93-year-old woman who had a history of underlying illnesses. She died of a cardiac arrest the day after she was inoculated.

Recently, a pregnant woman in Vava’u had a miscarriage the day after she was inoculated.

Dr ‘Akau’ola said that was too fast for the vaccine to have had that effect on the woman.

“She would have miscarried with or without the vaccine. But it had to be recorded because it happened after she was vaccinated.”

There had been no cases of blood clots reported from those who had been inoculated, she said.

Dr ‘Akau’ola stressed the importance of getting inoculated for COVID-19 and explained the amount of resources needed to look after a critically ill person.

“For one person in ICU, around six nurses are needed to looked after that one person, in one shift. We probably do around 8-12 hourly shifts. So that’s a big job for the Ministry of Health,” she said.

“It takes less work to roll out the vaccination program in towns and outer islands currently underway.”

“Science shows us, those who have died from COVID-19 are those who were not vaccinated!”

“I am appealing to people to please come and get vaccinated, so we can protect [others] children ages from birth to 11-years-old. There is no vaccine for this age group at the moment.”

She also pleaded that people not spread misinformation about the vaccine.

“That’s why I’m here this morning. I ask the people of Tonga, please join our vaccination program to protect our country, protect our health workers, and protect our children and grandchildren.”

“But the Ministry of Health will be given the authority to think wisely using science and ethical information before issuing a public health order to enforce vaccinations.”

This is in case unvaccinated people are considered a danger to the rest of the population, he said.

Not enforcing the vaccine is the wisest decision due to there being a chance for a side effect, he explained. But rare side effects can be managed.

Questions were raised around 30 Tongans who had travelled from the USA to Fiji earlier this year, had been stranded there due to the spread of the delta COVID-19 variant.

The Tongan government is funding their stay in Fiji until they can be repatriated.

Dr Reynold ‘Ofanoa said there had been discussions to fly the passengers to New Zealand and then to Tonga. But due to the COVID-19 situation in New Zealand, everything was on hold.

Dr Siale ‘Akau’ola said repatriating anyone from Fiji at the moment was too big a risk for Tonga.

“Fiji’s vaccination programme has been progressing quickly. Looks like all of Viti Levu will be vaccinated, they should reach herd immunity in October. So, we hope when it gets to that point, the virus will have greatly reduced, and our vaccination rate in Tonga will have increased.”

He said when we reached that point, we could discuss bringing them back, because it will be safer to repatriate them.

“At the moment, it is too dangerous to consider,” she said.

Maintaining sustainable tuna stocks in the Pacific is main focus for...