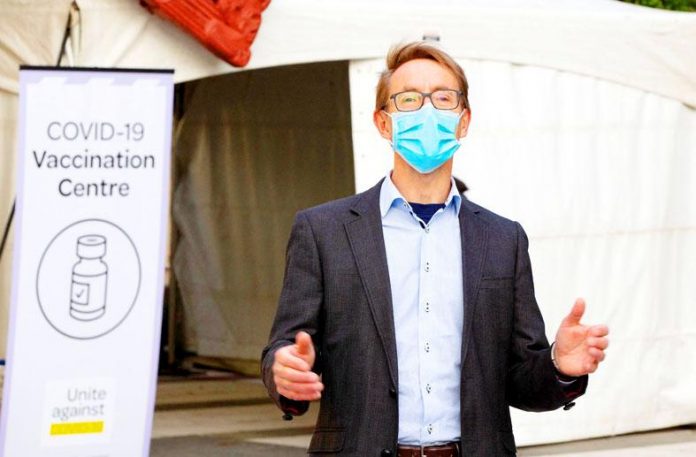 New Zealand’s director general of health has condemned “gutless” racism against Pacific communities, as the Covid-19 outbreak continues to grow.

Announcing case numbers on Wednesday, Dr Ashley Bloomfield said the ministry of health had seen racism being directed at Pacific New Zealanders, and that those racist remarks were “disappointing – and frankly, gutless”.

“I’m asking everyone in the country to be kind. The virus is the problem, not people. People are the solution, be part of the solution,” he said.

New Zealand announced 63 new cases of Covid-19, bringing the total number of cases in the outbreak to 210. It is the largest single-day jump since the outbreak began last week. Twelve people have been hospitalised with the virus.

A high number of cases in New Zealand’s outbreak are among the Samoan community, with most linked to a gathering at the Assembly of God church in Māngere, Auckland, before the lockdown.

Bloomfield specifically thanked Pacific New Zealanders and leaders for their hard work to contain the virus.

“It is our Pacific communities that have had the highest testing rates of any ethnicity, and particularly in our outbreaks we see the testing rates go up very high, they’re incredibly responsive,” he said.

New Zealand is battling to contain an outbreak of the Delta variant that swiftly led to a nationwide, level 4 lockdown – the highest setting – which has been extended until at least the end of the week. Auckland – the largest city, where the majority of cases have been detected – will remain in lockdown until the end of the month.

Dr Apisalome Talemaitoga from the Pasifika GP network and the Royal NZ College of GPs, earlier said the Pacific community was “bearing the brunt of targeted racist vitriol from a few racist, small-minded keyboard warriors on social media”.

“Thankfully, a community where respect for each other is paramount, which practises reciprocity and communitarianism, and does things for the greater good of all concerned, has shown we will lead the way in testing rates to help the country – not just Pacific people – to contain this deadly virus,” Talemaitoga said.

Dr Collin Tukuitonga from the University of Auckland’s public health department said the level of abuse online was not helpful. “These people are not responsible for this. The virus got into the congregation. No one has done that deliberately. It is a time to work together. At the end of the day, when you are protecting the Pasifika community, you are protecting the nation.”

Dr Tukuitonga added he felt very concerned for the health and wellbeing of Pasifika people. “I think we will see more and more cases for some days.”

Low vaccination rates, socio-economic disadvantage and poorer housing situations worked against the Pasifika community and put people at higher risk of contracting the virus and suffering its effects, Dr Tukuitonga said.
“There are a number of factors that continue to feed the cluster – they are not quite the perfect storm, but they are working against us.”

The Pasifika community has the highest rate of people living in overcrowded housing – roughly 40 percent of its population. Dr Tukuitonga said that was of serious concern, given the transmissibility of the Delta variant. “Often these dwellings are very small, so it is very difficult for people to isolate safely.”

Many essential workers, particularly in south Auckland, are Pasifika people, which puts them at further risk of catching the virus. And while the community has the highest Covid testing rates of any population in the country, the vaccination rate is the lowest.

The University of Otago’s Dr Dianne Sika-Paotonu said that was of significant. “More work and support is needed to ensure Pacific and Māori peoples and communities are indeed being prioritised.”

Dr Debbie Ryan from Pacific Perspectives said there must a circuit-breaker to address unacceptable disparities for Pasifika health. “The policy statements about health equity as a priority need to be backed up with real action at all levels of the health system,” she said.

Stranded in Australia and away from family, these Pacific seafarers face...